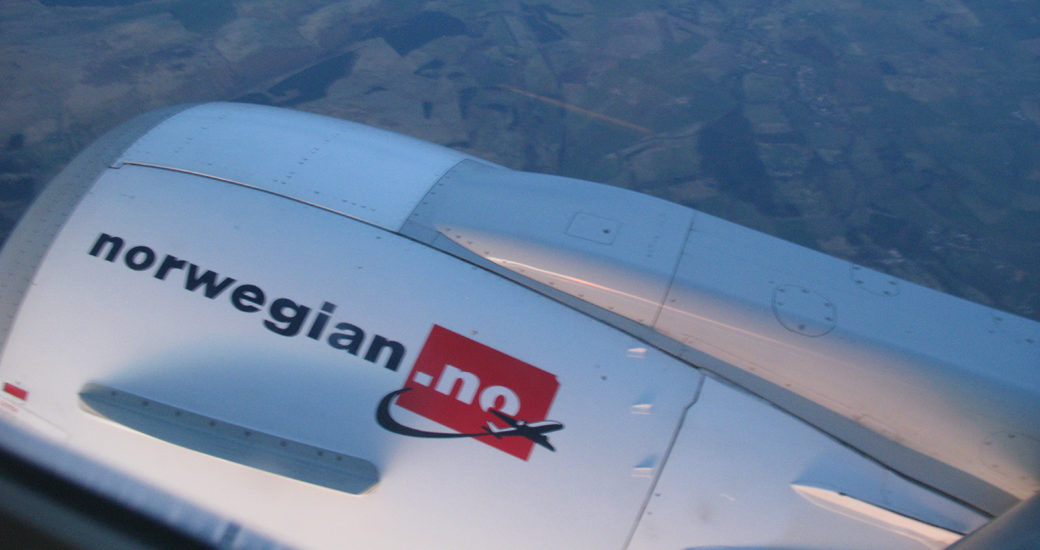 I owe my discovery of Ålesund to a photo posted on reddit. That single view – of the city at night, from Aksla – was enough for me to bookmark the wikipedia page and spend a year wondering how I could justify a visit. Whilst putting together plans to meet up with friends in Copenhagen, I realised that the cheapest way to get there from Edinburgh was on Norwegian airlines, connecting in Oslo. So then I couldn’t resist leaving a little earlier to build in a loop to Ålesund and back. Having seen Oslo fairly recently, I didn’t add a proper stop there – instead overnighting at the airport – but after Copenhagen I took the opportunity to pop into Sweden before my flight back to the UK. That was not to Edinburgh, but London – from there, I worked my way back to Scotland by train, via family in Suffolk and a conference in Cambridge. Altogether, almost a month away, covering four countries – including three in one day, with a meal in each! – using just five flights.

My first proper stop, then, was Ålesund. In the four days I had there I was easily able to fit in the two main attractions. The Jugendstil Centrum is a museum which explains the devastating fire and the city’s subsequent rebuild in art nouveau style- it also features a time travelling lift! Atlantic Park is an aquarium featuring what I can only describe as a fish cinema; there’s also a penguin park- whose inhabitants are fed by a guy in a tuxedo jacket, formal shirt and combat trousers, (a look I thoroughly approve of). I also got out onto the water by taking a local ferry service to nearby Hareid; the scenery during the ride is definitely better than the destination. Had I been visiting in the main summer season, a much better option would be a proper fjord cruise, but these and various other activities don’t start up until May. Moreover, whilst I generally got lucky with the weather considering how far north (and coastal) it is, on the one wet afternoon it truly hammered it down, so if you have more freedom in your travel plans I’d recommend a visit later in the year.

Much of my time, though, was spent simply wandering by foot, trying to commit it to both memory and memory card; this is often how I most enjoy experiencing a city. Ålesund really is a remarkable place, and whilst it was great to hike up the ‘town mountain’ Aksla to savour the view that had lured me here, there were so many other interesting corners to explore. I saw one of the huge Hurtigruten ships, which is probably the best way to access a whole bunch of small locations like this – definitely one for the bucket list.

My lack of Norwegian was rather more of a hindrance in Ålesund than on previous trips to Oslo, although that’s only to be expected. Many of the announcements about my flight (even the safety demo onboard!) were Norwegian-only, for instance, and timetables, menus etc. were less often bilinugal than in the capital. Everyone spoke flawless English, of course, but given the time of year and the ease with which I pass for Scandinavian, I tended not to be recognised as a tourist and thus most conversations would start out in Norwegian. Fortunately you can definitely smile and nod your way through shopping transactions or airport security, and by the end I could recognise various written directions (even if I wouldn’t trust my pronounciation in the slightest).

I was anxious about the limited transport options back to the airport, so opted for a distinctly un-holidaylike wakeup time to make the 7:50 bus. The driver of an incoming bus let me know that as the earlier morning flights had been cancelled so would the 7:50 bus; he also confirmed that my language skills weren’t all that bad, as the nearby advert really did read “More goat, more taste” (but was advertising brown cheese, not chocolate). This left me with the 8:30 departure – which distressingly arrives only 5 minutes before check-in officially. Of course, AES is such a small airport that there’s only one flight to be dealt with at a time, so they’re happy to wait for the bus.

I was completely unprepared for Copenhagen- on arrival at the airport it occurred to me that I didn’t speak a word of Danish, had no idea what to see, and although I was staying with friends hadn’t even noted down the address- not that I had a map anyway…

About half a dozen of us took over a vacant day care centre for the week, rapidly turning it into a geek compound thanks to high-speed broadband and an almost 1:1 ratio of computers. This made it surprisingly difficult to get people to unplug and go sightseeing, although we did eventually make it out each day. As well as having no accommodation costs, access to a kitchen saved us a lot on drinking and dining too – when we did go out in town, it was as painfully expensive as I’ve come to expect from Scandinavia. We quickly settled into communal living patterns that reminded me of my early undergrad days – only with better cooking and a greater tendency for people to pitch in with the cleaning up afterwards.

Fortunately the others were variously better equipped with ideas, maps, guidebooks or Danish skills, so I still got the chance to see plenty of Copenhagen’s attractions despite my own ignorance. Highlights included Rosenborg Slot (castle), the ruins under Christiansborg Slot, and Tivoli Gardens.

As mentioned, the idea of going to Sweden for a few hours, by travelling across the Øresund bridge/tunnel, was not something I could pass up. The route between Copenhagen and Malmo was via the airport, so I was able to take the metro there first, drop off my uncomfortable luggage and continue by rail. You can’t see a massive amount as the tracks run on the lower deck of the bridge, but there’s a certain novelty to spending whole minutes crossing water by train and you do get some views of the coastlines and an offshore windfarm.

Thanks to the Schengen agreement there’s no border control to mess about with on arrival in Malmo, but as with Copenhagen I realised that I had no real idea where I should be going or what to visit… The only landmark I knew of was the Turning Torso tower, so as I have a love of unusual architecture, I simply wandered at random until I could see it then homed in to take a better look. This lead me at first through some unappealing industrial / commercial areas, but the harbourside – with its striking modern architecture, and sunbathing swedes – was a much better place to have lunch than the airport.

I continued to rack up the miles once back in the UK… I was speaking at a conference in Cambridge, and for some reason thought it sensible to commute there each day – forgetting that the station is a significant distance from the university buildings in general and the maths department in particular. So I tended to skip the evening activities, but one afternoon we took a mathematical tour of the city, which I wrote about on my other blog if that’s your cup of tea.