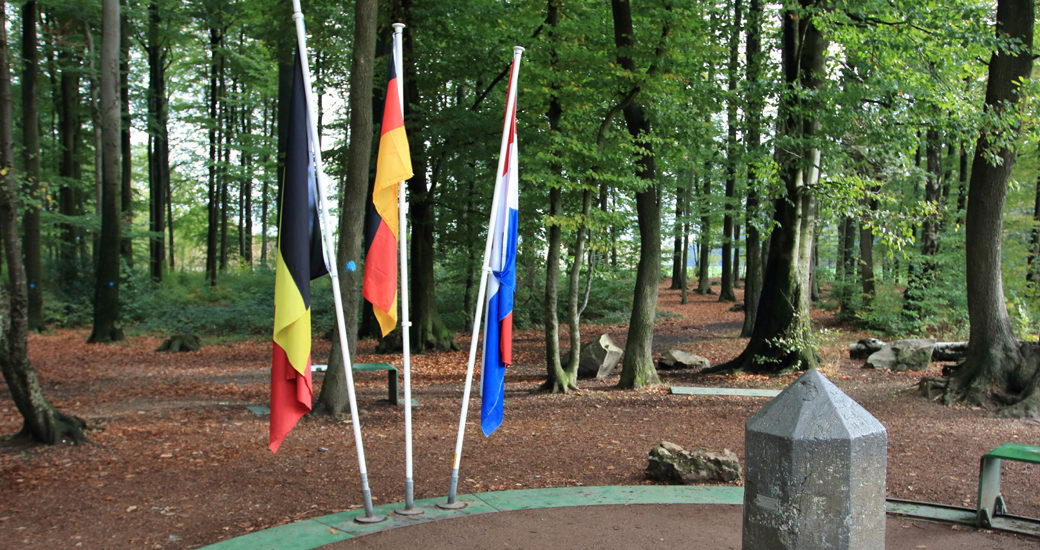 I’ve struggled before to articulate what it means to me to have visited a country, or rather what I consider unsatisfactory answers: legal, technical, or checklist-chasing definitions that are more about adding to a high score than travel seem to me to fall short. And yet… I do have a soft spot for improbable itineraries and travel-by-numbers exploits, provided they’re recognised for the stunts they are. For instance, back when I was working for BA I was particularly inspired by two of our pilots who managed to visit seven countries in a day. This might not sound too impressive, until you learn that not only did they not fly, they eschewed all vehicles, completing their route entirely by bike.

What I like about challenges such as this is that they’re not really about countries – they’re about borders, and reveal just how arbitrary these lines on a map can be. This is perhaps nowhere more evident than in the EU’s Schengen zone, where you can roam across the territory of 26 nations without any impediment legal or physical.

My own modest record in this area was set almost a decade ago, when I managed to have breakfast, lunch and dinner in separate countries (Denmark, Sweden and the UK). Whilst I wouldn’t be upping the country count, today I could significantly improve on the time taken, visiting a trio of countries in just seconds. To do so, I’d be taking advantage of another side effect of the sometimes artificial nature of borders: a tripoint (or triple point), where all three meet.

Schengen itself is another example of a triple point, and one I’d originally been considering making a pilgrimage to during this trip. In fact, Luxembourg is blessed with a triple of tripoints, and I’ve often daydreamed of a tour of all three (although this would only cover four countries). However, the precise location where Luxembourg, Germany and France meet is in the river Moselle – the Schengen treaty was thus signed on a boat. Borders often follow waterways, or similar natural obstacles such as mountain ranges; this means that of the already-short list of triple points, even fewer can be reached by foot. Fortunately today’s target, the Dutch/German/Belgian Drielandenpunt is a mutual land border. Although it sits at a remarkable elevation for the Netherlands – the highest point in the country is nearby – it’s still a mere hill in comparison to, say, the 3,800m of Mont Dolent’s Swiss/French/Italian alpine tripoint. Still, as I was visiting with Dutch friends, we naturally tackled it by bike – and the final approach was steep enough that I’m thankful we settled on e-bikes instead of our original idea of tandems!

We hired our bikes from Scooter Verhuur Limburg in Valkenburg, at €25 each for a day’s use. As Valkenburg is the wrong side of Schin op Geul for a trip to the Drielandenpunt, on the way there we took a meandering route via Sibbe and Gulpen rather than immediately retrace our train ride. More tired on the return, we took the direct route: frustratingly passing our accommodation with several kilometres still to go in order to return the bikes. In all, we racked up a total of 45km over the course of a few hours.

Of course, that was not entirely under our own power. The e-bikes came with a fairly hefty battery, but trying to keep up with Dutch cyclists is a fools errand so I made it back with literally 0km left on my range indicator (or, looking at it another way, I perfectly rationed the charge available). Whilst definitely helpful, it’s worth noting that the electric motor is an assistant, not a replacement. Stop pedaling entirely, and it will shut off: likely at the worst possible time if you’ve mismanaged the gears on a tough gradient. Still, there’s something rather satisfying about clicking the power rating up a notch instead of having to work harder on hills – and cranking it all the way to ‘turbo’ proved hard to resist on the flats! These were also the first bikes I’d hired in the Netherlands that came with brakes on the handlebars – essential given the speeds we attained. Then again, I’d say the same about cycle helmets, but those didn’t even seem to be offered by the hire place.

The Dutch cycle network operates differently to the UK: rather than numbered routes, there are numbered locations, and thus you must determine your next target from one point to the next. The upside, of course, is that you can create as elaborate a sequence as you desire, and if you somehow miss a checkpoint, you’ll soon find another marker to re-orient yourself.

The steepest section was on the final approach: a switchback hillclimb from Vaals up the viergrenzenweg. Since this is the road that leads to the tripoint, on reaching the restaurant, carpark and 34m viewing platform of the Wilhelmina Toren I assumed – in a fit of optimism – that this must be our destination. Whilst it was not – the border marker and its associated attractions are actually another 850m or so along the road – it did make a great late lunch spot, with the stylish bistro offering up hearty Dutch fare such as kroketten or stoofpot.

Thus refueled, we completed the short remaining distance to the Drielandenpunt proper; before parking up I nosed the bike across one of the borders, so that I could truthfully say that I’d cycled to Belgium that day. I also couldn’t resist a quick jog around the marker point, thus setting foot in three different countries in under ten seconds:

Each side of the border offers different attractions. In Germany, the immediate area is dense woodland: pleasant for wandering, but you’ll also find some exciting mountain-bike trails weaving through the trees. In the Netherlands you can lose yourself in more artificial surroundings: Labyrint Drielandenpunt is the largest hedge maze not just in the country, but all of Europe, and apparently it’ll take an hour to complete. Fortunately you can find some hints in Belgium, where another observation tower has been built: this one benefits from a lift and a rather larger viewing platform, and was my choice to fill some time before our return to the saddle.

I also made sure to set foot on the highest point of the Netherlands – or at least the European part. The peak of Mount Scenery reaches almost three times higher – but is also nearly 7,000km away on the Caribbean island of Saba, so will have to await a more adventurous trip.

Had we been a century earlier, we’d have been able to visit something now impossible – a quadripoint. The fourth state? Neutral Moresnet. No, I hadn’t heard of it either, but apparently the tiny district of Moresnet was hot property in the post-Napoleonic era due to its zinc mine (curiously, my hometown of Bristol was the only other place at that time where zinc could be refined). Contested by both the Dutch and Prussians, by 1816 they had managed to portion out most of the district, but the mine and a nearby village remained as Neutral Moresnet, under joint administration pending further agreement. None was ever reached, and in the end neither side would prevail: Belgium gained its independence from the Netherlands in 1830, and at the end of World War One, received Neutral Moresnet as part of the Treaty of Versailles, thus settling the hundred year dispute over this land. Today almost the only hint at this complex history is in that road name, and then only on the Dutch side – viergrenzenweg translates to ‘four borders way’.