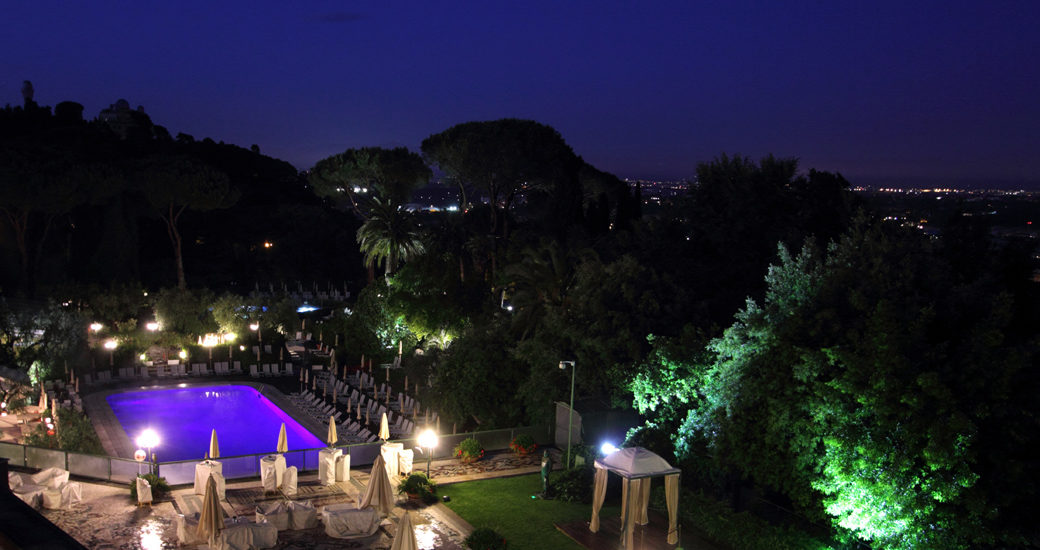 Like many, when the HHonors category changes / points devaluation was announced a while back I felt it would be best to burn at the old rates. After all the wailing and nashing of teeth, I’m still finding myself getting plenty of value from my HHonors points. But I’m doing so by opportunistic use of them – especially in part cash, part points form – for routine stays I needed to make anyway. What’s less viable is targeting the ‘aspirational’ properties: the kind of places I could never imagine paying the actual cash price for. This trip, though, was very much in that spirit: I put together five days in Rome purely to enable a single night at the Waldorf.

This is always a delicate balancing act: as soon as you’re flying somewhere, it makes sense to stay long enough to justify the airfare; but not so long that you water down the contribution of the points to the overall cost (alas I lack the kind of HHonors balance to cover, say, a week). Fortunately, Accor launched a 3-for-2 offer just as I was considering my options, so I decided that three nights with them before a weekend at the Cavalieri as grand finale was the way to go.

My 50K of HHonors points (and €2 in tax) had secured me a ‘King Deluxe’ room – the entry level option, but still far from basic! At time of booking, this would have run me €287 were I to be paying cash, so a notional £5 per 1K points value. However, at the Cavalieri booking the room is just the beginning: breakfast and wifi will each run you €25 a day, plus there are charges for spa access / sunloungers and eye-watering prices for drinks at the bar. So I’d argue that status is essential for a visit, as it covers many of these. A precise list can be found on their website, although the check-in staff made quite a show of enumerating all the benefits I’d be receiving; I am entirely vulnerable to this kind of ego-stroking! In particular, I was fortunate enough to be upgraded at check-in to a room on the ‘Rome view’ side of the building. Since I’m gold rather than diamond, such a one-category move is all I could hope for, and whilst I’m sure I’d have enjoyed what I booked, it was great to get something more. I didn’t do a great job of photos from the room, but I did sweep the camera through in video mode first so you can find a walkthrough here.

Without a doubt, this was the most comfortable hotel I’ve ever stayed in – or am likely to any time soon. I’ve had some pricey rooms in London, but I now see that much of the cost there was simple an artifact of location: the actual facilities here were a cut above. For instance, just in case you weren’t happy with the pillows, you could order replacements from a thirteen-entry menu; the blinds for the balcony could be controlled from bed; and there was a double-door system to block noise from the doorway. The staff are also clearly psychic, for just as I was surveying the free water and thinking that it was a shame there were no snacks, there came a knock at the door for a chocolate delivery.

As the weather was good I explored the grounds and took a stroll around the art gallery (still not my kind of thing, but seemed worth finding out!) before looking in to dinner options. I suspect I wouldn’t be able to pronounce the names of, eat elegantly, or indeed afford, the offerings from La Pergola – the triply Michelin-starred restaurant on the top floor – and L’Uliveto also looked bit outside my comfort zone. However, many folks on TripAdvisor had recommended the ‘Urban Bistro’ FooDoo. Whilst they have a standard menu structure, their signature is single plate combinations of starter, first course and main course all themed to a common ingredient or flavour. Naturally the portions are smaller, but if you want to graze a variety of items but don’t have a huge appetite, it’s ideal:

I took the meaty option, comprising a fried rice ball, pasta with egg and crispy bacon, and butter and sage bread with a beef burger wrapped in ham. There was also an amuse bouche of gnocchi, peppers and pesto; bread at no extra charge; a glass of wine; an excellent playlist on the stereo and what looks like a very well stocked bar. All for a mere €20!

Suitably full I wove my way back to the hotel (there’s a much quicker route using various stairways instead of following driving instructions, but it’s easier to get back than to figure out the way to the restaurant). As wonderful as the room is, I decided to settle in for a while in the lobby / bar area with a book (the improbably-titled but recommended “The Theory That Would Not Die: How Bayes’ Rule Cracked the Enigma Code, Hunted Down Russian Submarines, and Emerged Triumphant from two centuries of controversy”)

At the risk of fanning the flames, there’s been some… spirited discussion on the Flyertalk HHonors board about how formal one should be attired for a stay at a hotel like the Cavalieri. Whilst I tend towards the smarter end when travelling, I liked that the relatively informal approach some guests took meant that – whilst the surroundings were exquisite – I didn’t feel hopelessly outclassed or an imposter for my staying-on-points ways. By contrast, I would never have felt comfortable venturing into the cocktail lounge at the Bentley, my previous big redemption.

After a few chapters of Bayesian antics I retired to my room, first the balcony then indoors once it got too cool. I ventured back out for the barrage of fireworks at 11pm: I don’t know if this is a regular thing, but I’m always a fan (and it’s good to enjoy them on an Italian summer evening rather than a British winter one).

With the shutters down the room is properly dark, so I got a serious Sunday morning lie in before raising them (from bed) to bathe the room with sunshine: finally the hoped-for weather was in effect! However, all this lazing around meant I left breakfast far too late (10am) to get a table outside by the pool. The diner before me seemed outraged by this, but the breakfast room is no great hardship, especially if you find yourself revisiting the buffet. It’s a decent spread, albeit quite different to a British or American offering: I can’t speak to the authenticity of the Japanese section. But despite putting away a lot of the excellent smoked salmon, I was glad to be getting it through status rather than for the asking price.

Late checkout can only be confirmed on the day of departure, but I was able to arrange that on the way back from breakfast. That meant I could make up for breakfast indoors by spending most of the day out on the terrace, where sunshine, breeze and book meant I didn’t even mind dealing with the last minute emails from my frantic students (they would be sitting their exam the next morning).

Altogether I had a little over 24 hours at the Cavalieri; easily enough to fall in love with the place. I felt incredibly relaxed throughout my stay, something that is often absent from my trips! Still, would I book it for cash? Not unless it was for my honeymoon or something. Nor would I want to stay without status to take the sting out of some of the other charges. But even at the new HHonors rates – 70K Dec to Feb, otherwise 80K – I’d be tempted to build my way back up to allow another stay.