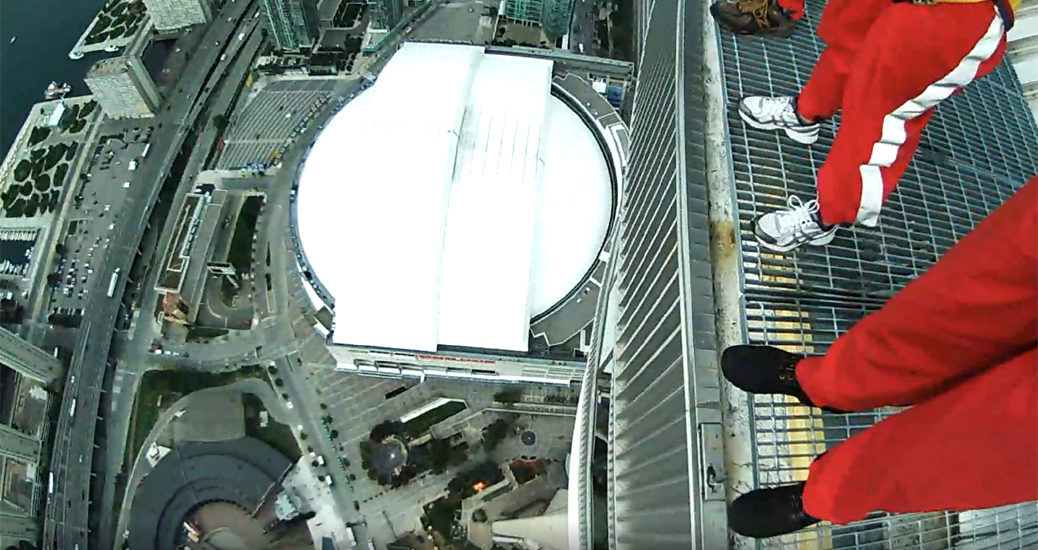 A little after 9am this morning found me perched on a bench with four strangers, each of us anonymously dressed in oversized red jumpsuits, further constrained by straps that pull awkwardly at limbs. I’d been temporarily relieved of all my possessions except my clothes, lest I somehow cause harm with them later; permanently relieved of almost $200; breathalysed; swabbed for narcotics; had surrendered my passport; and waived my right to sue over distress, injury or death.

All because I fancied a stroll.

EdgeWalk is the latest attraction at Toronto’s CN Tower (the world’s tallest), offering the opportunity for `extreme walking’ since the start of last month. A 1.5m-wide metal walkway (imagine a subway grate) has been added atop the revolving restaurant, 356m/1168ft above the ground below. Harnessed to a guide rail above, groups of half a dozen participants can complete a full lap of the tower, a half-hour wander that includes sightseeing, photo opportunities, and various increasingly distressing challenges. Naturally, it’s completely safe; equally naturally, that doesn’t necessarily help.

The EdgeWalk experience takes about 90 minutes in all, although a large part of that is spent in `base camp’ getting ready. As alluded to above, absolutely nothing that could fall or be dropped, no matter how innocent seeming, is allowed beyond that area. We’re not just talking wallets and mobiles, you’ll have to remove all jewellery, empty tissues from pockets, and spit out chewing gum. Your shoes will be repeatedly tugged at, and if they can be pulled off, you’ll be given sturdier replacements. If you need glasses to see they’ll be secured with a lanyard, and the key to your locker goes up with you, but other than clothes that’s it. There’s screening for ‘narcotics, explosives and alcohol consumption’ (presumably this doesn’t mean they check for explosives consumption) and a barrage of excluded medical conditions. But provided you’re in good health, at neither extreme of the weight scale and sufficiently tall/old then you are allowed up – it’s intended to be as accessible as possible. Staff help you kit up with the jumpsuit, jacket and harness, with everything quadruple-checked before you even leave the ground floor.

Then there’s a private lift up to the last staging point, where you get your first glimpse of the walkway and attached to the overhead cable system. For redundancy, there’s both the main cable you hold (cling?) onto, attached to the front of your suit; and another on the back, which locks like a seatbelt if you tug it too violently, which I imagine would be much appreciated should you stumble. Having somehow ended up at the front of the group, I had an unconstricted view out to the walkway, and to the islands in Lake Ontario beyond – after the mounting apprehension of getting ready, finally facing it was almost a relief.

Not that you’re given much time to get complacent; almost immediately after we’d all got onto the ledge, we had our first challenge, “toes over Toronto”. This requires simply stepping up to the lip of the walkway so that the toes of your shoes are in thin air – watching the video back having completed the more daunting tasks, it’s amusing to see how hesitantly I shuffled out! With this mastered, we rapidly moved on to the backwards lean: assuming a seated position, walking back until only feet are on the walkway, then straightening legs and throwing arms out wide. This is not so different to preparing to abseil down a climbing wall, something I do at least a dozen times a week, so whilst the drop is a hundred times higher, familiarity saw me through.

The advantage of these manoeuvres is that wandering around on the walkway is then comparatively unscary, so we’re able to enjoy the views afforded by the clear weather: be they of trains, planes or people below, the massed skyscrapers of the downtown core, or simply out to the horizon over the lake. Our walk leader also played tourguide, helping us both track down more distant landmarks and learn a bit about them (including a tale of the Royal Bank Plaza windows getting their colour from millions of pounds worth of actual gold, that I took to be a wind-up but is apparently true- no smartphone wikipedia access 116 storeys up!).

Along the way, though, we had to face our toughest challenge – the forward lean. Whilst your feet stay rather further from the edge for this one, it’s the ultimate test of faith in the equipment. As long as you hold the rope, you’ll have tension, but to get your hands out to your sides, it’ll have to go momentarily slack until your greater lean angle pulls it taut again. Which’d be fine, were you not already facing forward – or to be accurate, down – and assuming an alarming angle over the edge. Whilst I did eventually manage it (not helped by being first up), I politely declined the invitation to then stretch out onto tiptoes!

Thankfully after that it was just more sightseeing, and a few more backwards leans for solo and group photos, before completing our loop. I was better able to appreciate the views out of the lift on the descent back to basecamp, where our photos and videos were prepared whilst we extracted ourselves from the safety gear and offered reassurance to the next group preparing to go up.

EdgeWalking gives you a pass for all of the other CN tower attractions (which you can use at any point in the next few days, if, for instance, you’d rather see the view at night). But I’d already done that a couple of years ago, and after the windswept walkway, the glass and mesh confines of the viewing decks just seemed tame. However, from the higher ‘skypod’ level it’s possible to look down on the EdgeWalk route and get a fresh perspective on what you just did (the leans seem rather more dramatic when viewed from above). On the main level, meanwhile, you can enjoy a smug grin as you eavesdrop on regular visitors watching the action from the cameras dotted around the walkway.

Bonus challenges for film fans: not pretending to be in Armageddon when kitted up and slowly walking to the lift; not referencing Titanic when doing the forward lean.