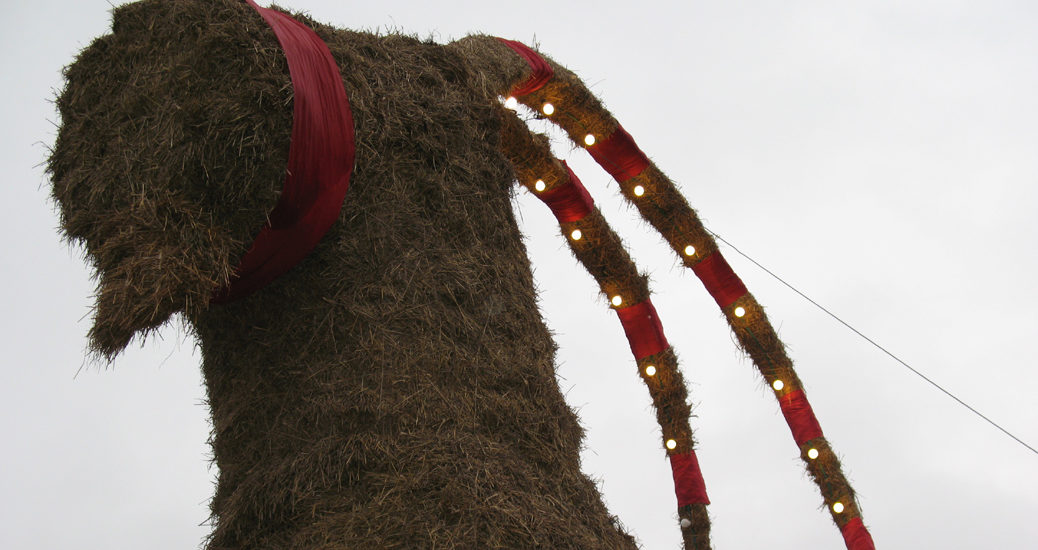 In the second phase of this trip we also made a visit to Gävle. We did so partly in search of snow – but despite this being further north than I’d ever previously ventured, it proved as elusive there as in Stockholm and Gothenburg. No matter, though, as this small city featured an even rarer attraction:

Every year since 1966, the good people of Gävle have built a giant version of the traditional Swedish Yule goat (Julbocken); and more years than not, the bad people of Gävle have burnt it down. Sometimes it experiences a different fate – struck by a car, collapsed due to sabotage – and sometimes the arsonist is from elsewhere (most notably an American who received 18 days in jail, and fled to the US with his 100,000SEK fine unpaid). But burning is its typical fate, and this is probably as responsible for the goat’s fame as its size; Gävle goats have reached record-holding heights of almost 50ft, and typically weigh several tonnes.

This means that even if you’re mad enough to arrange a trip to see it (and there aren’t too many other reasons to recommend trading a day in Stockholm for one in Gävle), there may be nothing left to see. Fortunately we did get to witness 2008’s a few days before christmas; less than a week later bypassers thwarted a first attempted burning, but the goat succumbed to the flames of a second one early the next morning.