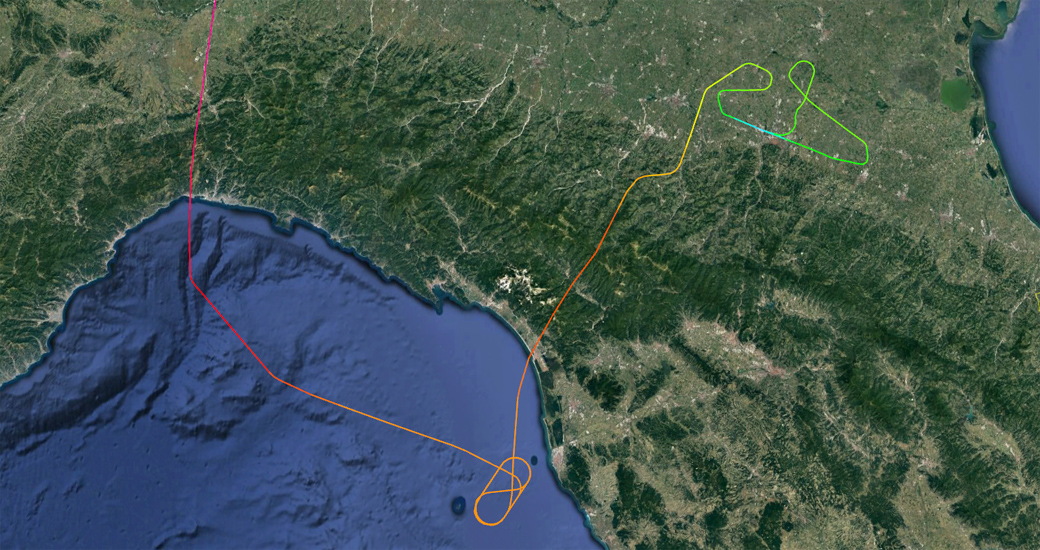 My very first flights – back in 2004 – were with Ryanair, between (almost) London and (almost) Oslo. To those I added a pair of Edinburgh-Dublin trips in 2007, and ‘Stockholm’ Västerås at the end of 2008.

By that point, though, I had discovered that better low-cost carriers were available, with a dozen flights on EasyJet plus a couple on Norwegian – figures that have since grown to over forty flights between them. Coupled with an increasing appetite for full-service airlines, I managed to avoid setting foot on one of O’Leary’s planes for over a decade.

Alas, this summer’s plan to join friends in Tuscany coincided with the British school holidays and thus attracted eye-watering fares on most airlines. Thus I grudgingly opted for a Ryanair flight from Stansted to Pisa. Booking back in April, a one person, one way ‘plus’ booking – two cabin bags, seats together and speedy boarding – could be had for £106. So far, so good.

Adding a hold bag was another £24, after separating our bookings to avoid us both being hit with that fee. The airport being a good forty miles away from the hotel we were staying at in London, I added tickets for the Stansted Express (£38 between us). Trying to stave off the low-cost experience, I opted for a £5pp upgrade to first class which included fast track security.

Three months later, reality began to set in. Torrential weather meant a disrupted journey to Liverpool Street, and there we learnt that the ‘Express’ would be taking a slow route. But Ryanair’s self bag-drop worked well, and fast track was a visible improvement over the standard lines. Thus we made it airside with plenty of time to kill in the lounge… except it was too full to accept Priority Pass customers. A known risk, but one I’d never fallen afoul of until now, and which meant shelling out airport terminal prices for snacks and drinks instead.

Boarding did not go smoothly – in the time it took us to reach the distant gate, it had been reassigned. Once we found the right one, the next task was establishing which of the depressingly long queues was ‘speedy’ boarding. This was, if anything, the longer of the two, much to the amusement of a friendly old Italian gent in the other lane that we chatted to as neither made any progress. No such luxuries as jet bridges awaited past the desk – instead, another wait on the tarmac before shuffling aboard.

Whether as a side effect of the boarding mess, or just regular incompetence, staff were unable to reconcile the headcount of passengers with the number expected. This dragged on so long that we missed our take-off slot; thus it wasn’t until an hour and a quarter after our scheduled departure that we even pushed back from the gate.

A couple of uncomfortable hours later, this turned out to be a problem: huge storms were now raging in Pisa. Thus we entered into a holding pattern off the coast, making a few loops before the pilot announced that we’d be diverting to Bologna – a first for me! This should only have taken another 30 minutes, but then came another undesirable aviation first – an aborted landing, just 500ft from the ground. Getting ourselves turned around for an approach from the opposite direction consumed another half an hour, for an eventual touchdown 2 hours 20 minutes late – and 75 miles from where we actually wanted to be.

Fortunately, the flight and cabin crew did their best to keep us informed after landing, explaining that we wouldn’t be re-positioning to Pisa as a flight, but busses would be arranged. Unfortunately they would be the last Ryanair staff we would hear from that evening, whether in person or by phone, email or their app.

Instead, we entered (unknowingly) into a two and a half hour purgatory by way of the baggage hall. This ordeal started at 8:30pm local time. Since 3pm all I’d eaten was half a chocolate bar, so our first Italian meal of the holiday was a couple of ‘pizza-flavoured’ snacks from a vending machine. That was the only catering option our side of the door of no return: at least we got there fast enough to purchase one of the few savoury items stocked.

Rumours (never substantiated, but believable) began to circulate that Ryanair wasn’t prepared to pay the baggage handlers, so they weren’t prepared to handle our baggage. This stand-off lasted two hours before the belt finally rumbled into action, but it was half an hour later – just shy of 11pm – that ours appeared. Onward travel by coach was now useless – we wouldn’t reach Pisa until 1am, and our Villa was completely inaccessible without a car.

Before we’d even disembarked the plane, I’d contacted American Express to check whether their platinum card insurance would cover us if we abandoned our journey until the morning. Reassured that it would – although, crucially, not by a representative of the insurance team – we thus began to cheerfully spend the quoted figure. Thus we hopped in a taxi (€20), booked the Mercure directly opposite Bologna Centrale Station (€104) whilst en route, and picked up dinner – mostly wine – from the nearest restaurant (€35).

The next morning we squeezed in some sightseeing, before we embarked upon a three hour, €94 train ride to finally join our friends – by now well into day two of the trip, and enjoying Lucca.

Back in the UK a week later, I found that Ryanair’s complaints team are far quicker off the mark than airport operations, replying within 13 hours. Their response, of course, was to duck any responsibility, blaming weather for all the delay. This wasn’t entirely unexpected, but the next stage was – on formally contacting Amex, they too denied our claim. Apparently, travel delay compensation only counts for your departure time – set off within four hours of schedule, and it won’t matter how long you’re inconvenienced along the way.

Whilst these were some novelties, this was far from my first disrupted flight; I’ve run into IRROPs on numerous carriers, including full service ones. Is it worth writing off an entire airline because of one poor experience? Well, the difference is how they respond to such incidents. As it happens, a trip a month earlier – to Amsterdam, with KLM – had also gone awry. But the contrast in care could not be more stark.

I’d flown BRS-AMS fnumerous times with KLM’s subsidiary, Cityhopper, which operates lovely Embraer aircraft. However, this summer they’d decided to up-rate one of the services to a KLM mainline 737. Although I spotted this change when booking, I didn’t realise that this would be their first time operating the Boeing on this route (and in advance of the official start).

Sadly, the debut flight from Schiphol never made it to Bristol – after getting most of the way, a problem occurred and they decided to return to base:

I spotted this happening from the comfort of the lounge, so wasn’t too surprised when our flight passed through ‘delayed’ to ‘cancelled’. Impressively, a member of staff came to find all affected passengers in the lounge, and directed us back landside.

There the situation admittedly wasn’t great: with every seat sold on a plane 30% larger than they normally use, there was a lengthy line and limited chance on getting on another flight from Bristol. But I made some queue friends and was able to reassure them that they shouldn’t be out of pocket.

Sure enough, once I made it to the desk I discovered they’d be going to great expense to re-accommodate me: booking a seat on a BA service out of London City (not even an alliance or codeshare partner), and footing a £200+ bill to get four of us there by taxi! I also received an £8.50 voucher for snacks to see me through the (in the event, close to four hours) car ride. Fortunately LCY is a breeze security-wise, and I was soon settled in to an Embraer to AMS after all.

Back in Bristol, a compensation request put in through their straightforward claim page was answered the same day – even faster than Ryanair. Their response cited technical reasons but did not try to argue those as extraordinary circumstances (as some airlines have). Instead it included a €350 voucher good for use on KLM, Air France, Delta or (unlikely) Kenya Airways in the next 12 months. Standard cash compensation of €250 was also an option, but partial spend of these vouchers resets the clock on the balance so I knew I’d have no difficulty in making good use of one.

Either way it meant a profit on my original ticket price (approx €205), and I still made it to the Netherlands and back. I even managed to extract a few avios and tier points from the BA leg by switching the frequent flyer number on the booking!

It also represents a good investment on KLM’s part – this experience only increases my willingness to fly with them again, whereas Ryanair’s actions will see me avoiding a tenth flight with them for as long as possible…