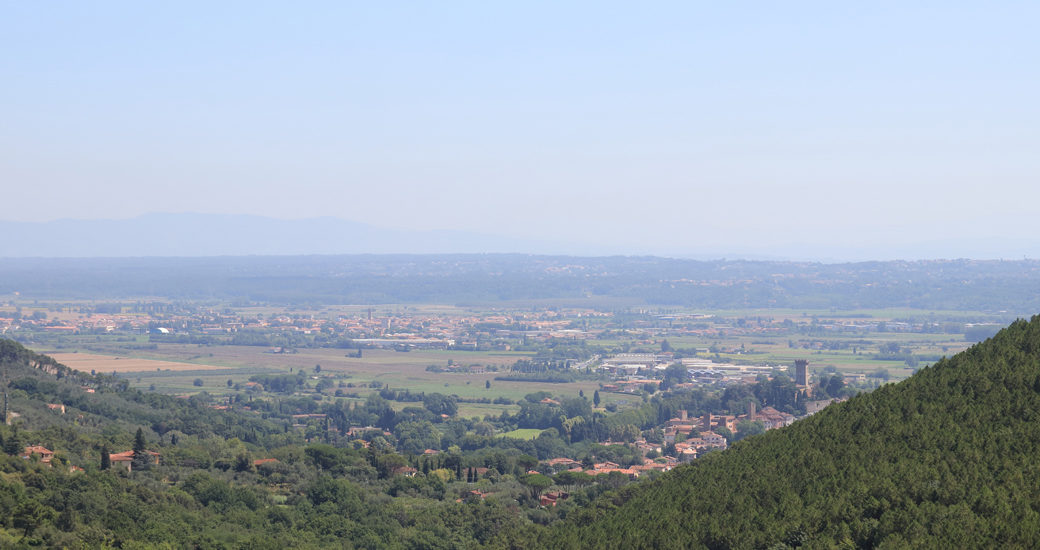 Building upon 2018’s tester, this year we upped the ambition for a group holiday with Dutch friends, as a dozen of us made our way to meet in Italy for a summer holiday. Although intense temperatures, a wonderful (but remote) villa and the desire to simply enjoy the assembled company encouraged us to put in a lot of lazy time beside the pool, we managed some exploring too! As with Limburg, this was a case of new territory in an otherwise familiar country: despite various trips to – and then through – Italy, I’d never spent any significant time in Tuscany. 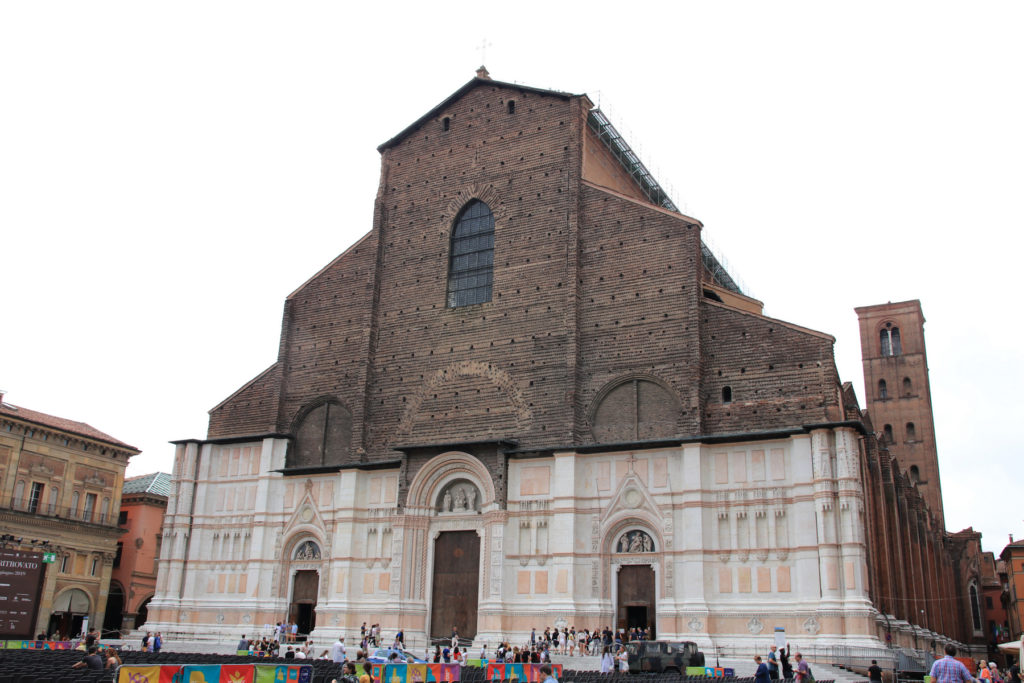 Thanks to Ryanair delivering us to a different city than planned, Alaina and I started the trip separated from the others, with an overnight stay in Bologna (booked in a taxi from the airport at around 11pm)… Although keen to rejoin the group, we did manage a couple of hours of sightseeing the next morning – from what little we saw, Bologna warrants a proper (i.e., intentional!) visit at some stage. 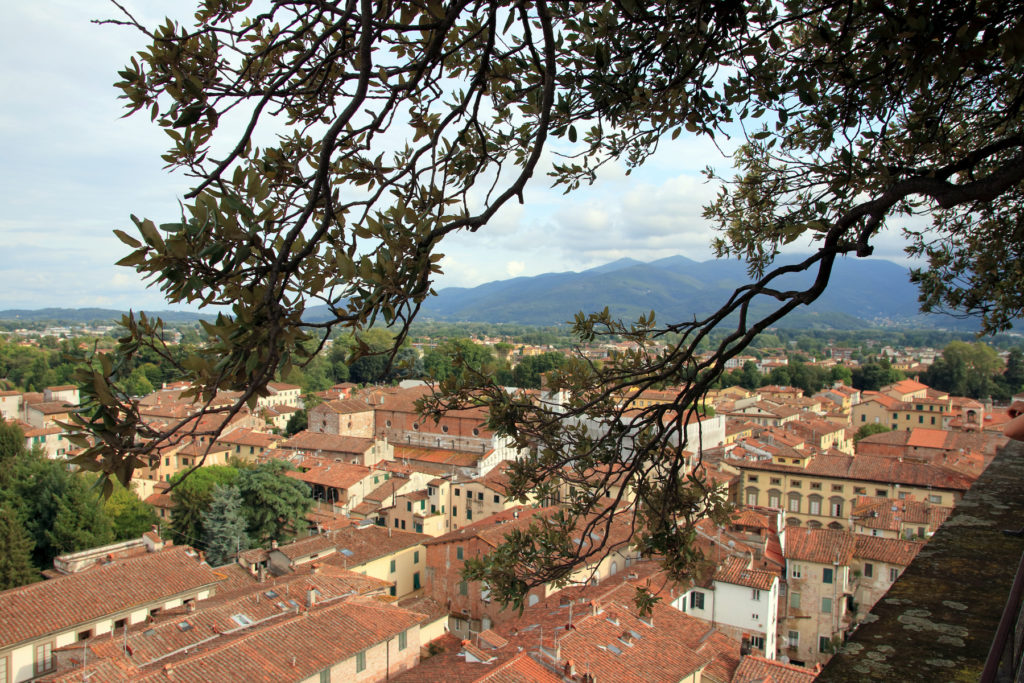 A trio of trains later, we caught up with our friends towards the end of their first sightseeing excursion. Lucca is somewhere I didn’t even know existed, but found immediately agreeable – its historic centre sheltered by thick city walls reminding me of Mdina. The view is best admired from the top of the Guinigi tower, where somehow they have managed to grow oak trees – provided you can cope with the vertiginous interior staircases. 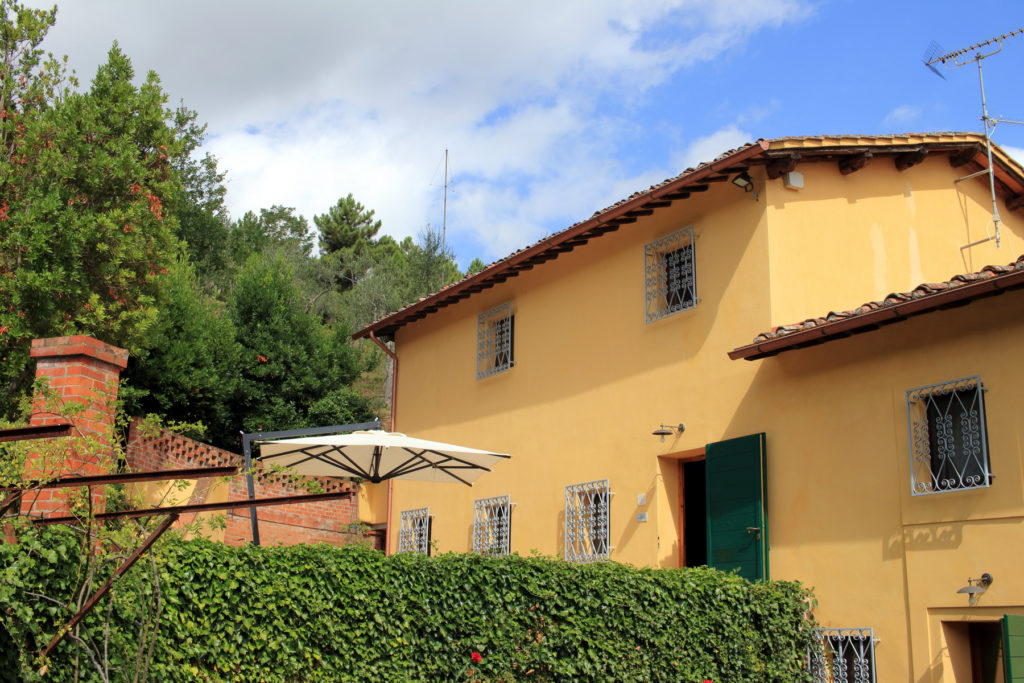 Our base for the rest of the week was Villa Campo Lungo (Dutch link). Its hillside perch at the end of an unpaved road – jeeps recommended – made it the only property for at least a kilometre in any direction, and thus a great place to get away from the world (or at least the UK’s political turmoil). At night you could hear wolves and see stars, whilst one morning Alaina disturbed a group of wild boar in the garden – quite a change from our usual hotel city breaks! As mentioned, the pool – plus a shaded seating area – offered excellent respite from the Italian summer; after some storms the first weekend, daily highs routinely cleared 35C, pushing closer to 40 a couple of times.

The nearest village, Vicopisano, is about a thirty minute walk down to the foot of the hills- worth a visit if you’re staying here or nearby, but I wouldn’t see a need for a detour from one of Tuscany’s larger cities. More rewarding is to head uphill, with plenty of hiking trails available. Admittedly, we wouldn’t have picked the one we did – to the unfortunately named Verruca Fortress – had we realised just how vertical the route was, even with our elevated starting point compared to the village. Fortunately the way was initially obscured by fog, which added to the already other-worldly experience of walking through woodland recently devastated by fires. Often the path had acted as the limit of the burn, with damage on one side and lush green on the other – but even in the blackened sections, nature seemed to be making a resurgence. 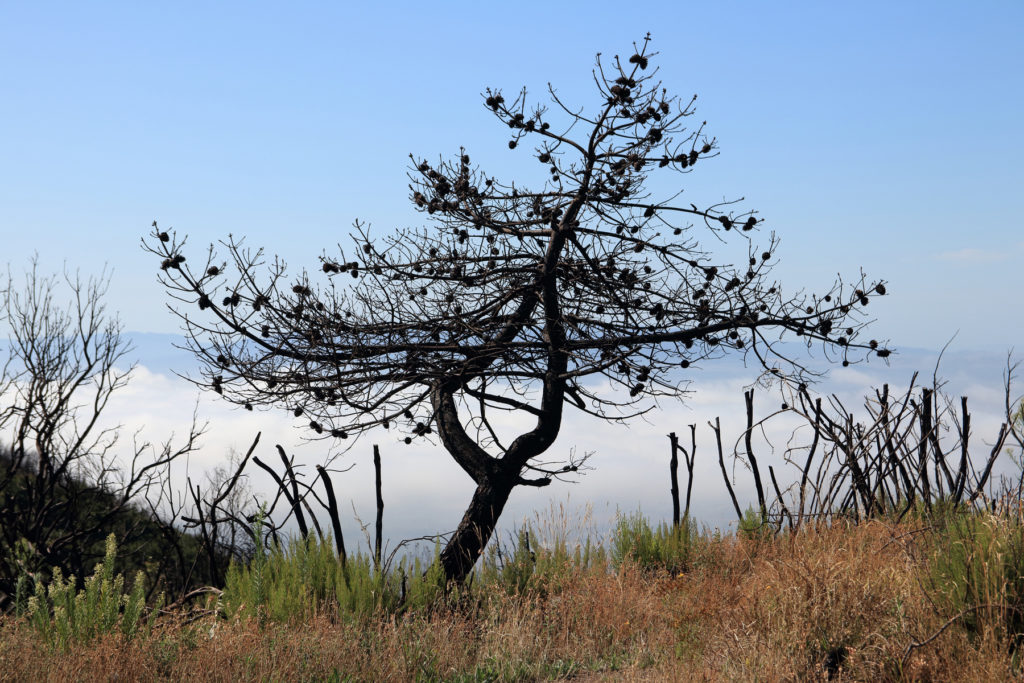 As we climbed, the fog cleared from the hillsides – but continued to nestle in the valleys below. The fortress turned out to be the highest point in the area, and thus a great place to enjoy these gradually unveiled views from. However, it’s quite the scramble to get up to the ruins themselves – I’m still not sure if we followed a path or a dried up stream! Start early, bring plenty of water, wear sturdy shoes: and don’t trust Google’s estimate of an hour or so to reach the top… Round-trip took us three and a half hours; in all that time, we met just two other people, both mountain-bikers. 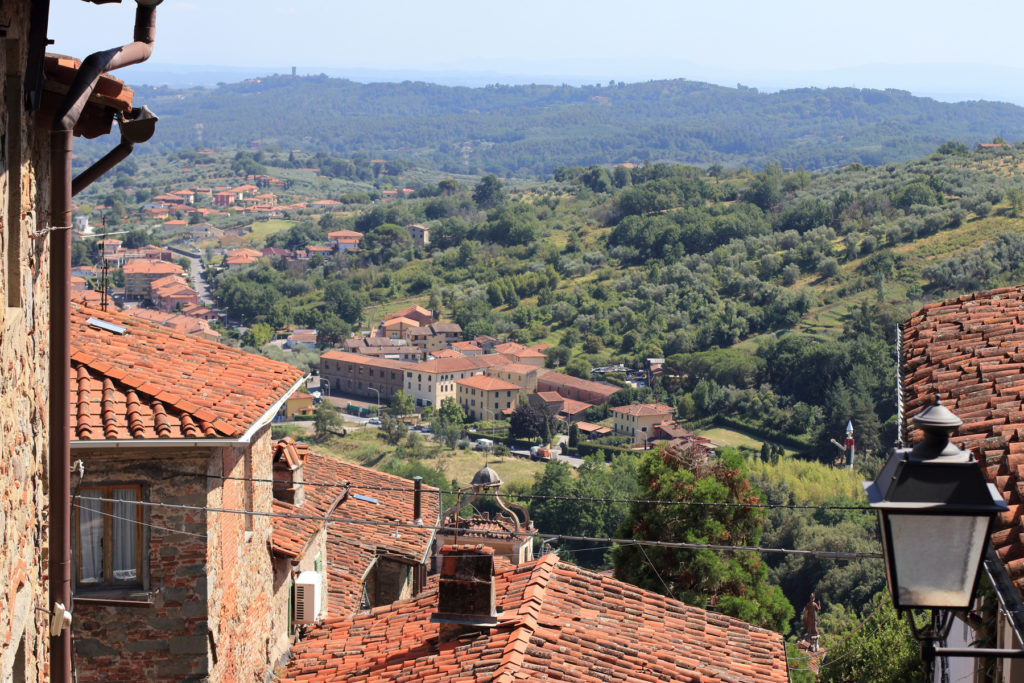 Similarly deserted – and steep – were the winding streets of Collodi, another destination I knew nothing of until this trip. Its claim to fame is as the childhood home of Carlo Lorenzini, author of Pinocchio; naturally there is now a theme park dedicated to the puppet who wished to be a boy. This we decided to skip in favour of exploring the hillside village and the elaborate botanical gardens, set in the grounds of the imposing Villa Garzoni. 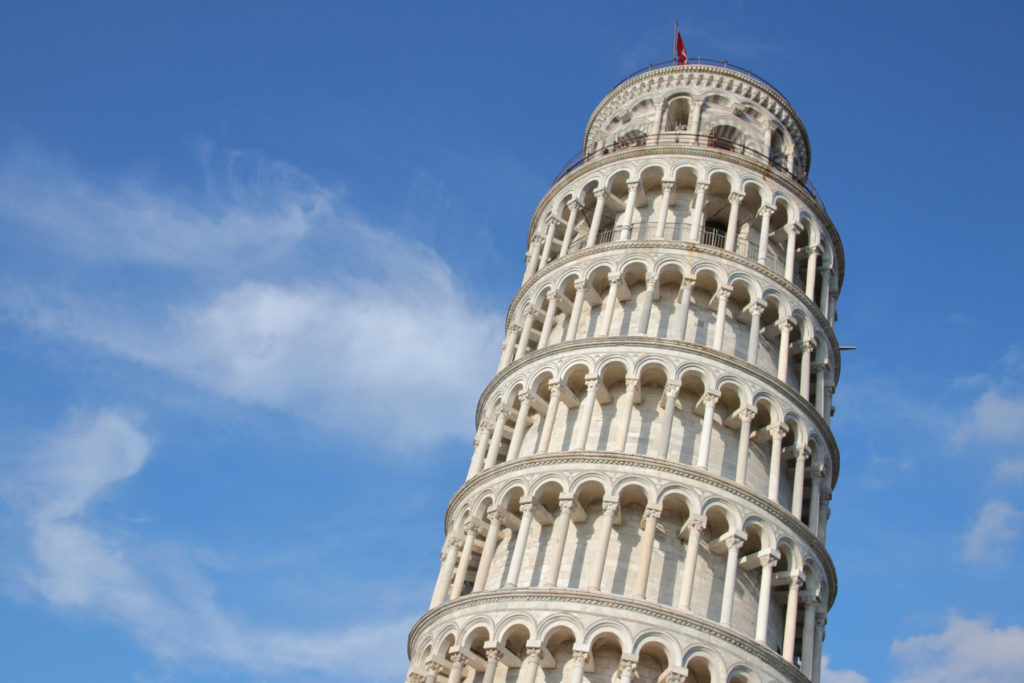 Despite Ryanair’s best efforts, it didn’t take us long to visit Pisa! As a group we quickly ticked off the obvious landmarks of tower, cathedral and baptistery one evening before escaping the crowds for dinner (just a few blocks from the tower, the number of tourists dropped substantially – until we turned up, of course). Alaina and I returned at the end of the trip: with a surplus of time to fill before our flight back to the UK, we put together a leisurely itinerary of street art, gelato (from Tuffo 13, recommended!) and the botanical gardens. 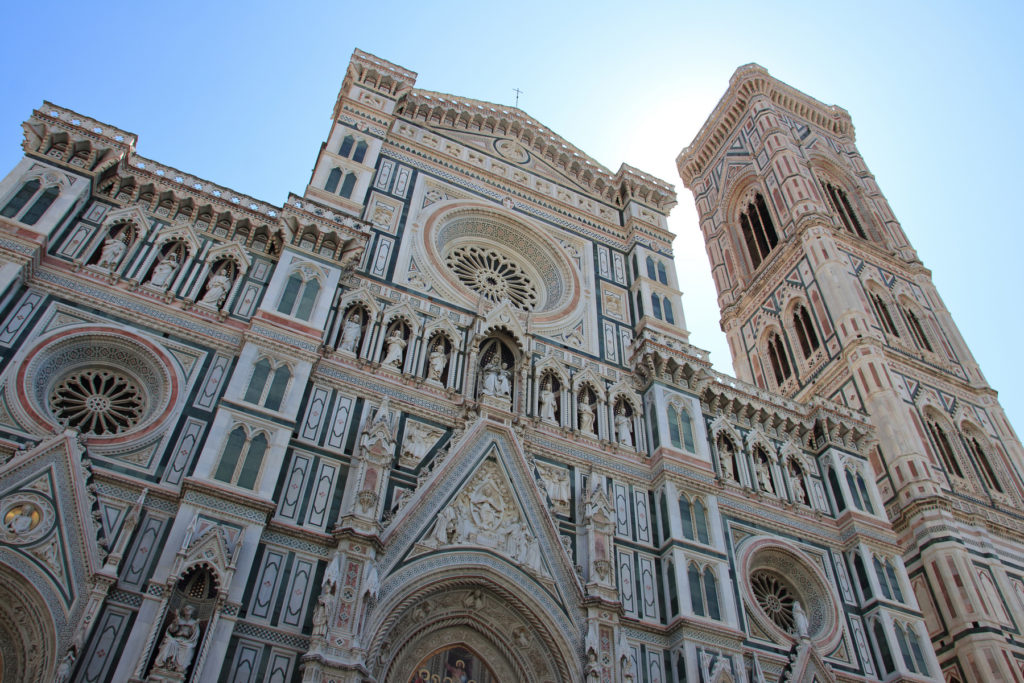 Although the rest of the group put more time in, Alaina and I made only the briefest of visits to Florence. Temperature and crowds conspired against anything more than a sample before we beat a retreat back to Pisa around midday. But the stunning architecture and deep history has us entirely convinced of the need for a return; it just seems that a weekend city break in winter would work better than our attempted summer day trip.