As I would be leaving and re-joining the Zephyr at several stops along its epic route, I was able to book individual legs into whatever class of travel seemed most appropriate. In particular, I saved some money by settling for a coach seat on the shorter daytime stretches – which I then used to upgrade longer runs from my usual roomette to a family bedroom. Of course, there’s more to these trains than where you sit / sleep; so here’s a tour of everything I experienced onboard!

The California Zephyr is a ‘superliner’ service, which means all passenger cars are double-decker. It’s only possible to move between cars on the upper level, which is where the majority of passengers will travel – but there are both sleeper accommodation and coach seats on the lower level alongside bathrooms and luggage storage. I’ve never figured out how to select a particular spot – for the roomettes an assignment is made at booking, whilst in coach it’s when you board. The family bedroom, at least, is predictable – there’s only one in each sleeper car! 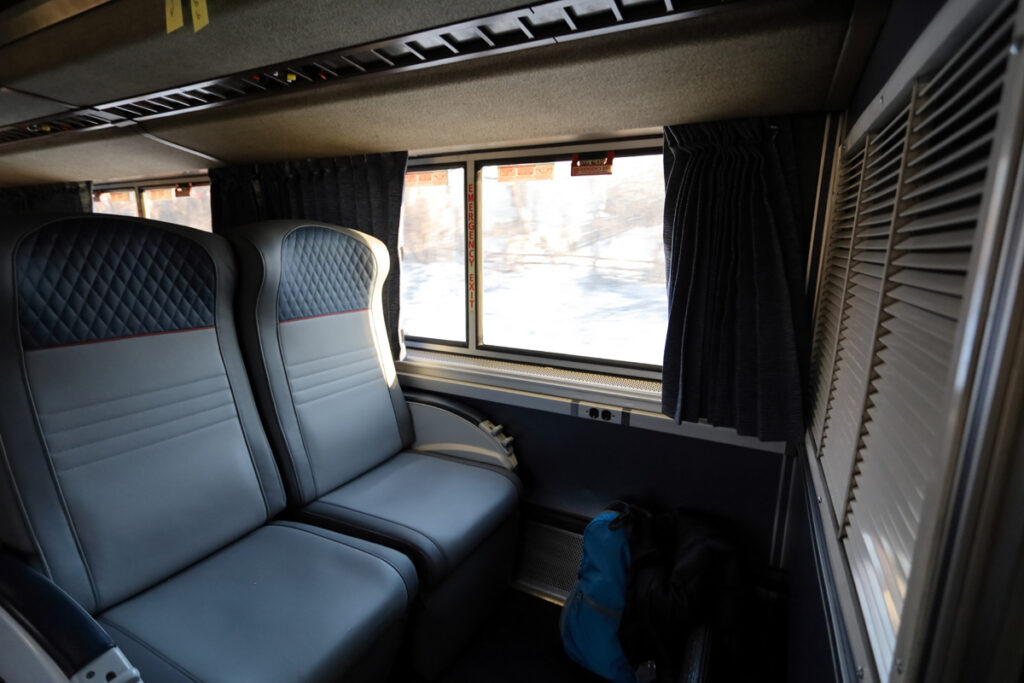 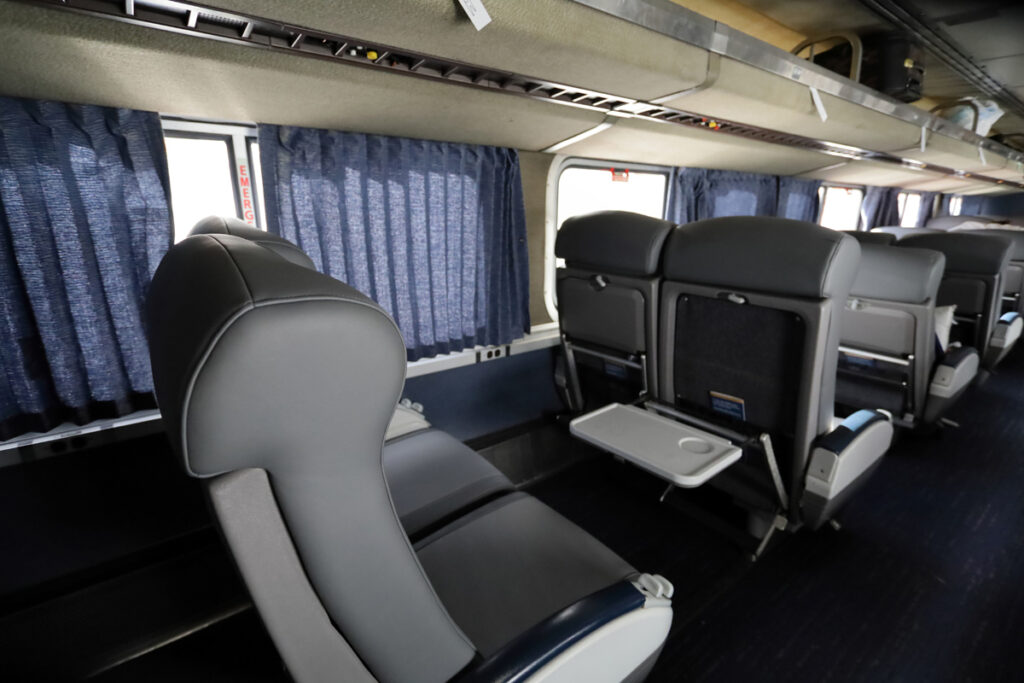 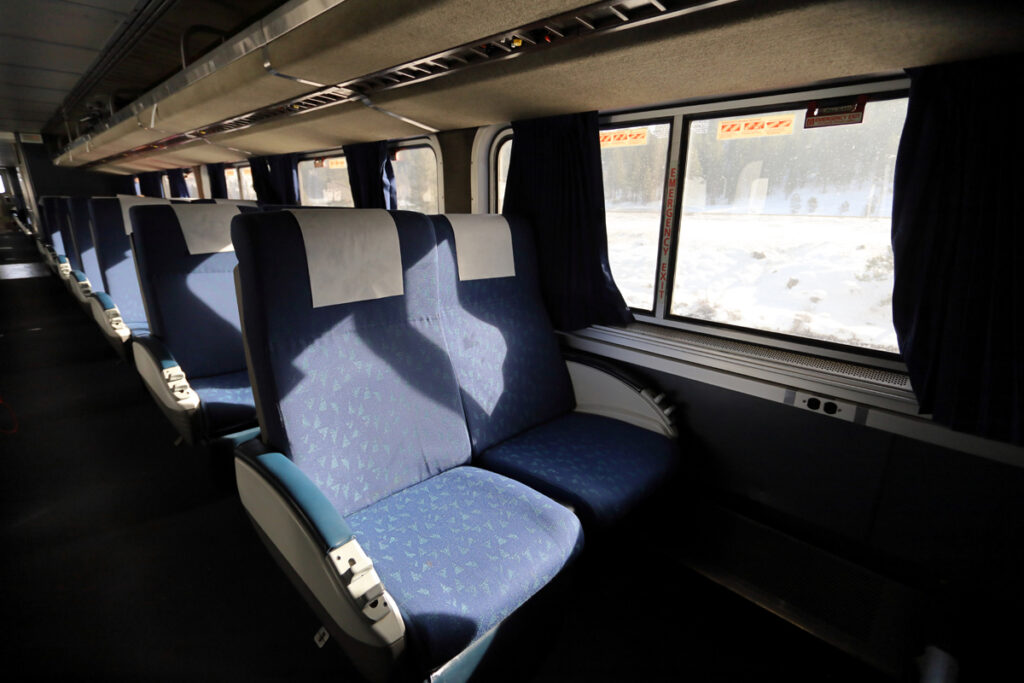 With the first two legs Chicago – Mount Pleasant – Omaha scheduled for daytime (although not necessarily daylight) and clocking in at a relatively modest four and five hours, I decided I should start my journey in coach. Even the cheapest sleeper car quarters – a roomette – would have cost hundreds of dollars more, money better spent further down the line.

As you can see, there are at least two styles of seat in use, and this can vary not just between trains but the cars making up a particular service. However, apart from the furnishing the config is the same – pairs of forward facing, decently wide and well-padded seats that recline a fair amount. Most also feature a foot rest and a tray table attached to the seat in front – although the very front row, where I was sat for the first leg, misses out on these. There are overhead racks for smaller carry-on items, although I found the legroom generous enough to keep my daypack to hand; my much larger backpack I was able to stash downstairs. The windows are of a good size – not that it mattered on the second leg, which took place entirely in darkness!

All in all, I found this to be far more comfortable than an equivalent amount of time in standard class on a British train, and at a fraction of the cost. Of course, not only is America much bigger than the UK, but Amtrak runs much slower, so you could spend much, much longer in one of these seats… Whilst I was happy in coach for this opening portion of the journey, I don’t think the full 50+ hours would be an enjoyable experience.

A lot of that is not due to the seat itself, but the associated facilities – or lack thereof. Usually the lack of showers is the biggest problem, but with COVID-related capacity limits still in effect, the dining car was unavailable to coach passengers when I travelled. That would mean two days surviving on whatever snacks you’d managed to bring or buy on board, with the only option for a hot meal being the microwaved marvels on offer at the café. Hopefully traditional dining will return post-pandemic, but my fear is that this will become a permanent cut. 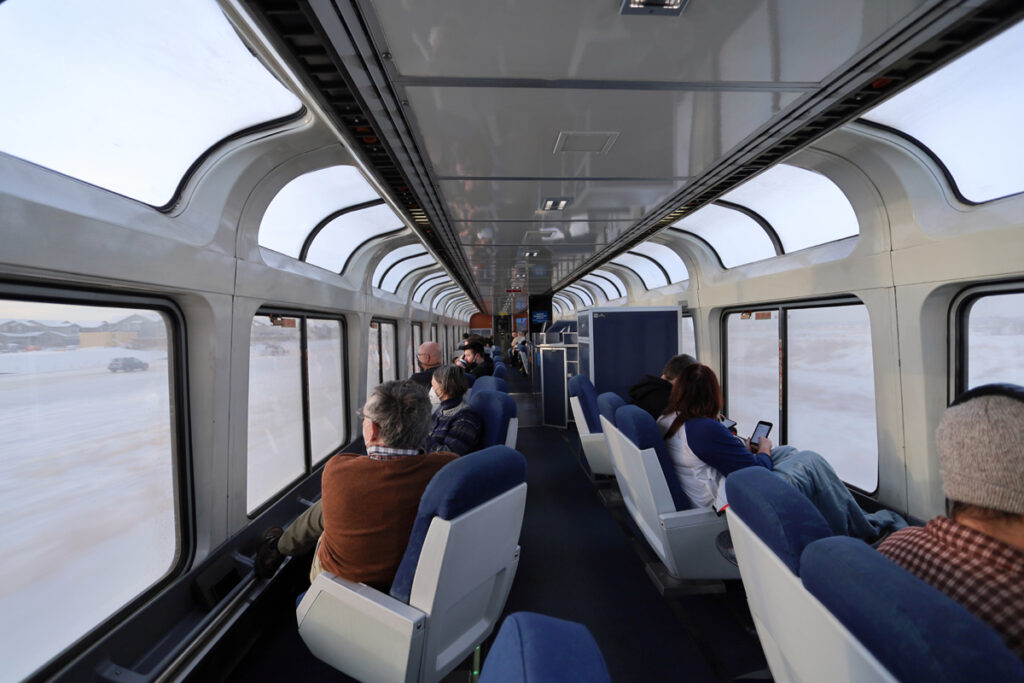 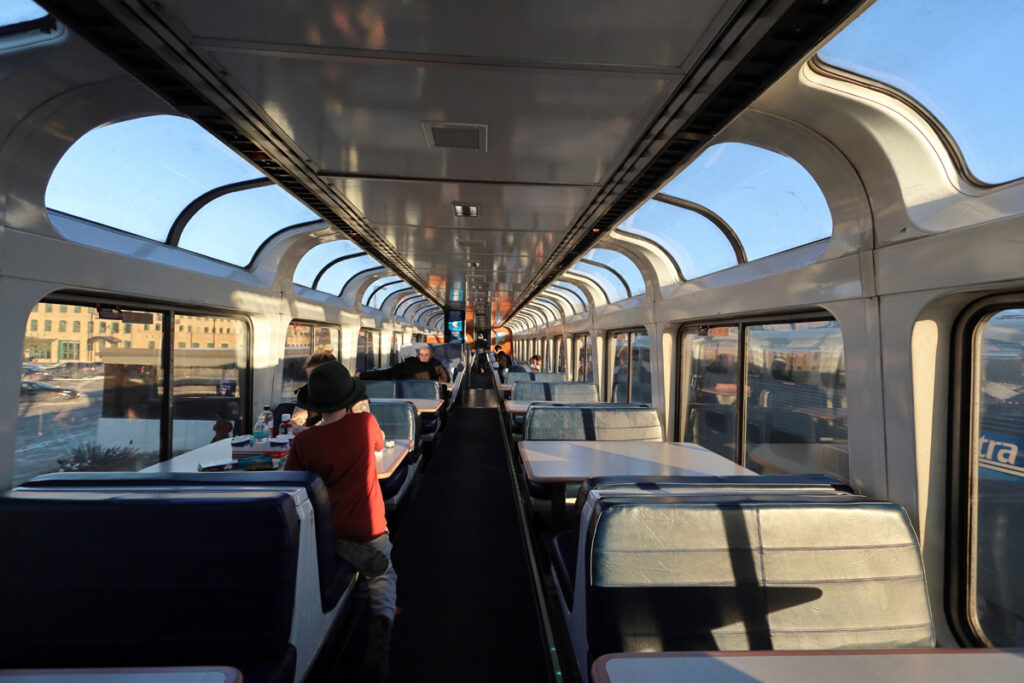 Although the dining car was off-limits to those in coach, the sightseer lounge remained available to all passengers. As the name suggests, the upper deck of the observation car has been modified with floor-to-ceiling windows and a much lower density seating configuration. This is split into two halves: outwards facing bench and solo seats; and groups of four seats arranged around tables. Claiming a space is on a first-come, first-served basis, so for the most scenic portions you’ll want to get there early. (Westbound on the California Zephyr, that’s probably Glenwood canyon, for which you’ll want to settle in no later than Denver.)

The lower deck of this car is where you can find the café; ordinarily there is additional table seating available here to enjoy your purchase, but thanks to COVID it was operating as takeaway only during my trip. Here is the menu that was in effect; as mentioned earlier, you’ll struggle to eat healthily if these are your only options for two days! 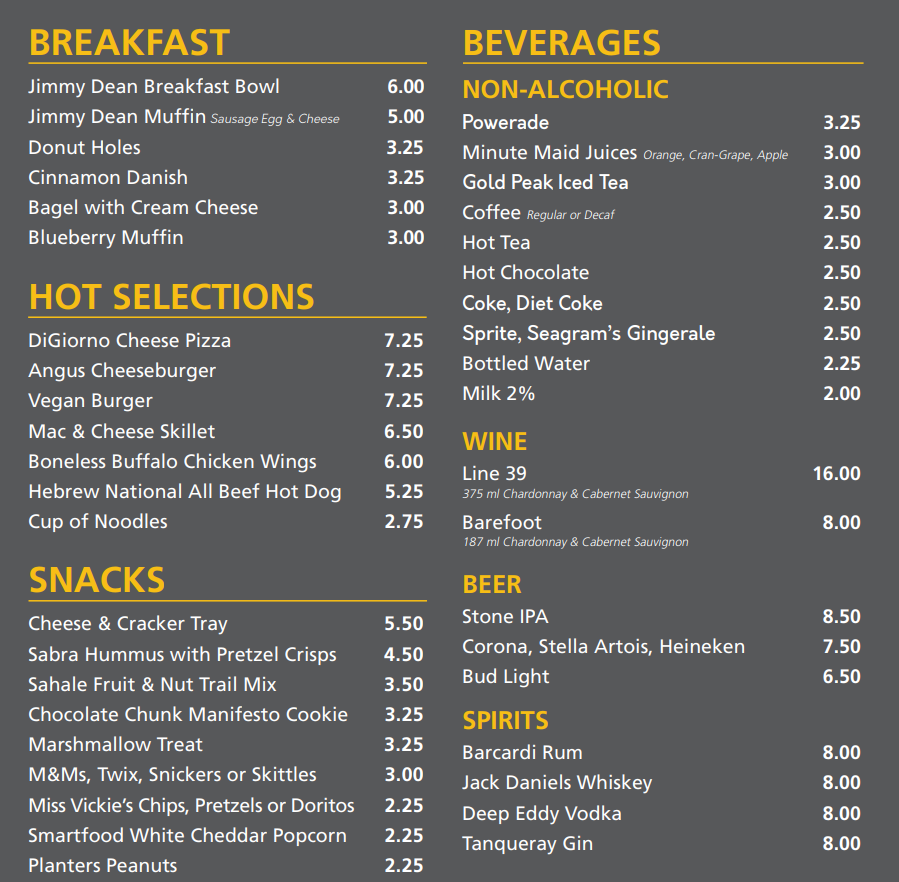 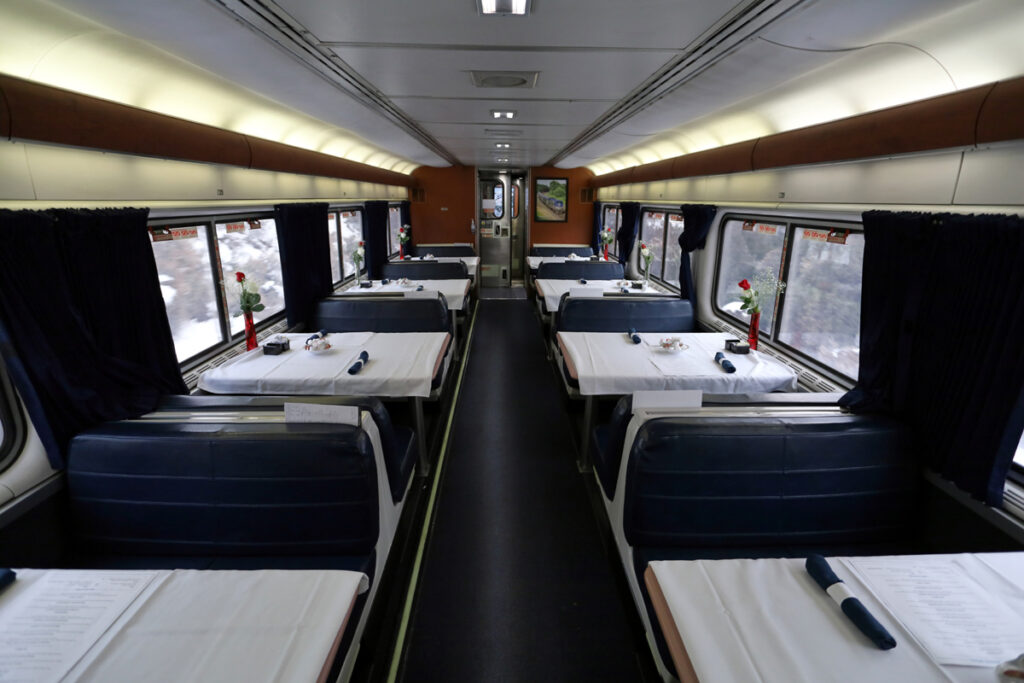 As mentioned, ‘traditional dining’ on the Zephyr is now exclusively available to sleeper car passengers. Hot breakfast, a two-course lunch and a three-course dinner are offered for free (although this being America, you’re still expected to tip; alcoholic beverages are also extra). Unlike the café’s sling-and-ding offerings, these are ‘chef-prepared’ in the on-board kitchen. They’re also served on proper plates, although COVID meant shrink-wrapped packs of plastic utensils instead of real cutlery.

Breakfast and lunch are walk-up, whilst dinner operates on timed sittings which you need to reserve in advance. Since I was hopping on and off of trains, I often wasn’t around when reservations were being taken – you’ll still get a meal, it just might be an odd time slot!

Pre-COVID, a communal dining approach generally saw each table filled up with four people. Now, the rule seemed to be that at most two travel parties could share a table – and only if necessary. So I mostly dined alone throughout my trip – a shame, as I’ve often enjoyed the single-serving friends aspect of meals on Amtrak.

Here are the menus that generally applied when I travelled – although it’s worth noting that a freezer failure meant a much-reduced take on the lunch options on one of the trains!

Despite being well aware from my day job in revenue management of some of the psychological tricks involved in pricing, I remain utterly vulnerable to them. With the Zephyr departing Omaha at 11pm and taking over 15 hours to reach my next stop, Glenwood Springs, I knew I’d want a private room. The jump from an $84 coach seat to a $416 was steep – so when I spotted that I could have roughly three times the space in the shape of a family bedroom for just $32 more, I was unable to resist the upsell.

This then had a halo effect for the next portion of the trip, to Salt Lake City: despite being a relatively modest 2pm-11pm run, I picked the $302 family bedroom over a $202 roomette. Perhaps fortunately for my bank balance, these weren’t available for either of my remaining legs! 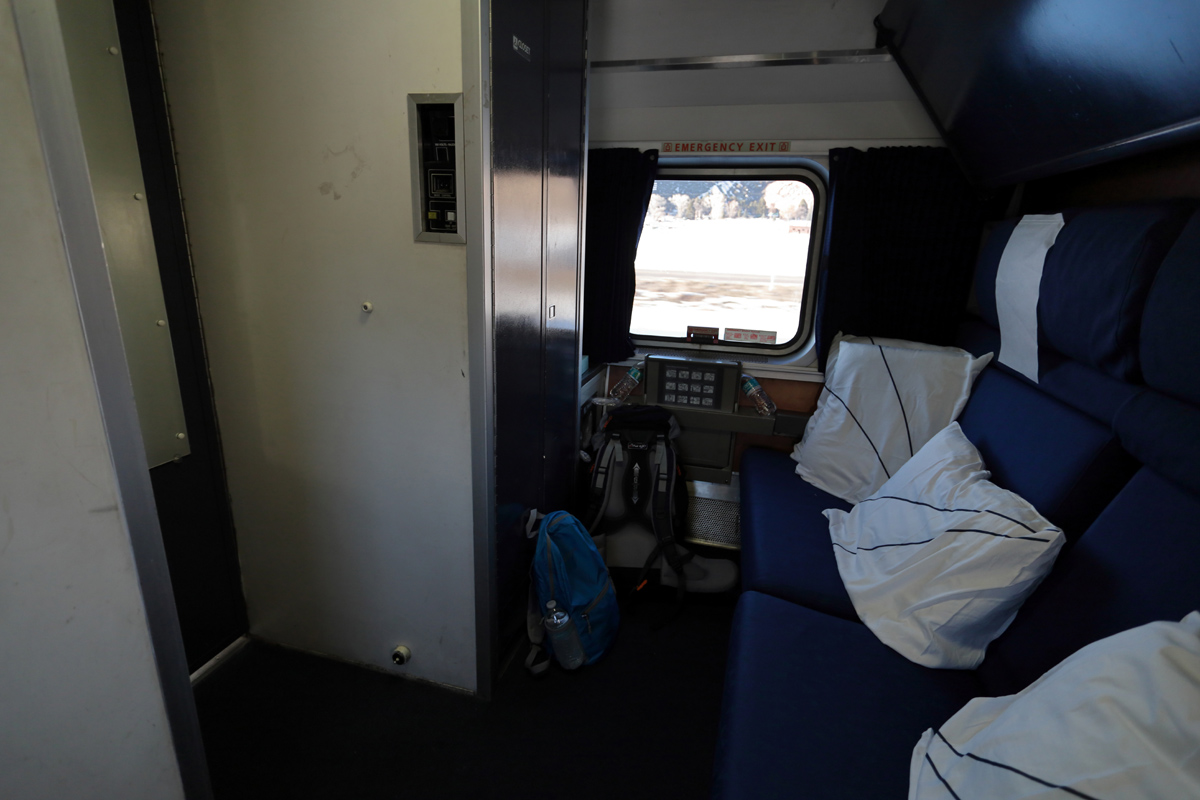 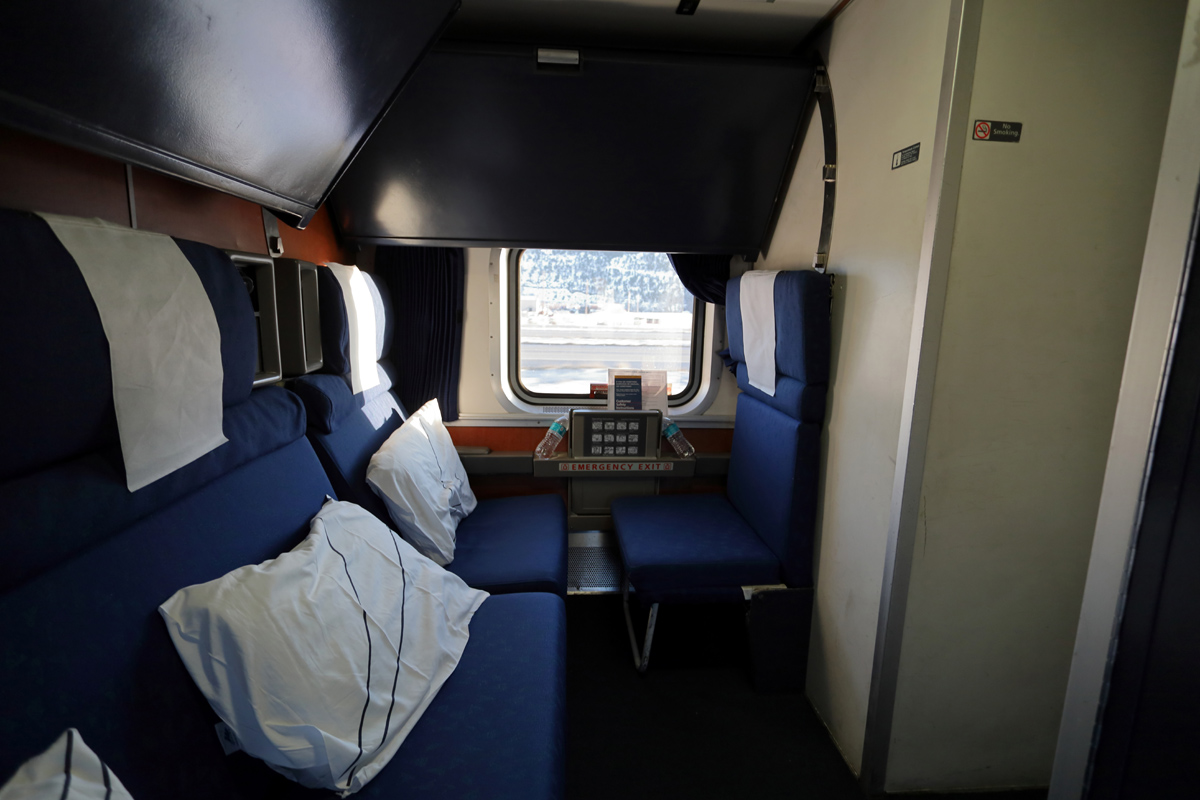 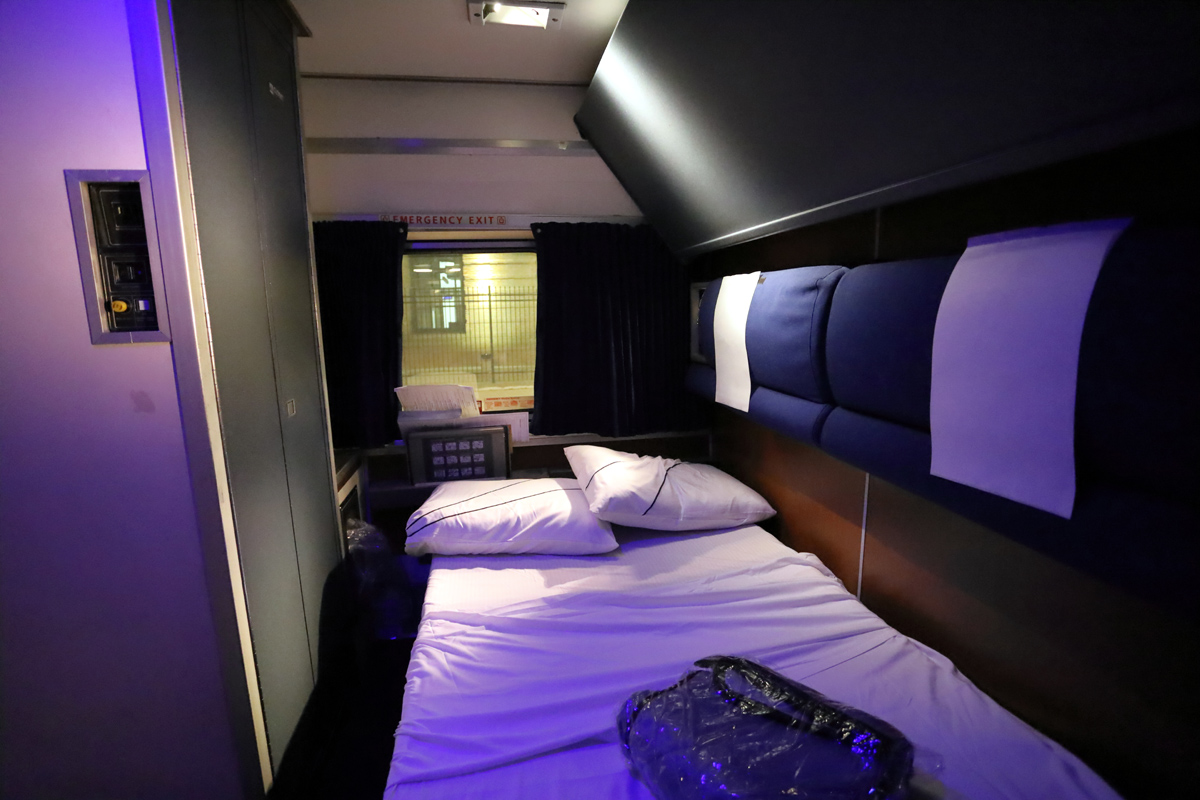 There is only one family bedroom per sleeper car – it occupies the full width of one end of the lower level (the equivalent space at the other end is an accessible bedroom). It accommodates at most two adults, with the bathroom you’d usually get in a bedroom sacrificed for more sleeping space – although this is only suitable for children. Toilets and the shower are thus shared with the roomette passengers.

For one person, it’s obviously more than enough space, particularly in day mode when it would comfortably seat four. One perk of the layout is that you get a window on both sides of the car, so regardless of which has the best view, you can enjoy it from the comfort of your own room. However, you may find the long bench is facing backwards rather than forwards.

In night mode the main bed is at right angles to the direction of travel, which took a little getting used to. I slept fine, but it might not be for everyone. It’s also perhaps the most private room on board – the lower deck is generally more quiet anyway, and there’s no reason for another passenger to approach the dead end which is your room. The door is also a proper one, rather than a sliding door with curtain as in other rooms / roomettes; closed off from the car, you’ll be plunged into total darkness with each mountain tunnel!

One final note – the only power socket I could find is in a useless position, several feet off the ground in the entrance area.

and so at last to a familiar friend from my Coast Starlight journeys – the roomette. Although two people can travel in one of these – which certainly works out more cost-efficient – I maintain it’s best for a solo traveller.

Roomettes can be found on both levels of the sleeper car, although I always seem to get the upper level. It is also luck of the draw as to whether you’ll have a view to the left or the right – I experienced both despite having the same Room 2, Car 531 assignment for two consecutive rides. But what a view it is – particularly in sleeper mode, it feels like the side wall is almost entirely window! Waking up to sunrise over the desert in Nevada was a particular treat.

Whilst I enjoyed the extra space of the family bedroom – and was glad to save some money in coach earlier in the trip – if I had to commit to a single option for an end-to-end run this would still be my preference. Maybe one day I will splash out for the standard bedroom, but for now this completes my superliner tour!