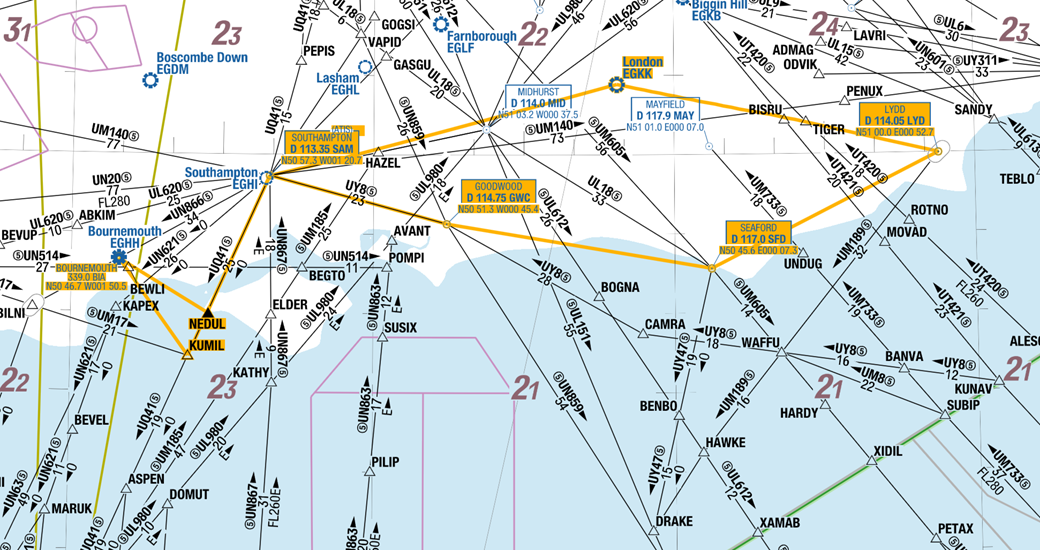 But ultimately the Airbus narrowbody offerings found greater favour with the airline, and by the time I joined the company in 2014 there were just a handful of the G-DOC* 737-400s operating out of London Gatwick. This rather mirrored my own flying experiences – with just 7 flights on G-DOCA/T/U/Z compared to seemingly endless segments on A320s. Those did cover some notable trips for me though – including my first Club Europe. I’ve also become interested in the idea of ‘firsts and lasts’, so paid attention as conversations began to pop up regarding the final flights in 2015.

The ever-attentive BA board users identified the last commercial offerings scheduled on September 30th, and I believe an FT Do to Turin arose as a result. Sadly I couldn’t quite justify to myself an international daytrip, not least when the equipment couldn’t be guaranteed, but also considering the cost and the need for a day off work. Of much greater appeal was a rather special opportunity for staff only: a charity ‘farewell’ flight around the south coast of England taking place the day before. Seats were being assigned by lottery, and by the 20th I learnt that the ballots had been drawn and I hadn’t made the cut. But a few days later – some of those initially selected presumably not being available – I got an offer from the second drawing! After a nailbiting extra 24 hours wait for approval from my manager of a short notice half day, I received confirmation on Friday afternoon that I was on the manifest for Tuesday’s flight.

As mentioned, I’m not particularly familiar with Gatwick, so on my way in I managed to completely miss the specially constructed check-in lane/desk for the helpfully numbered BA2737C: 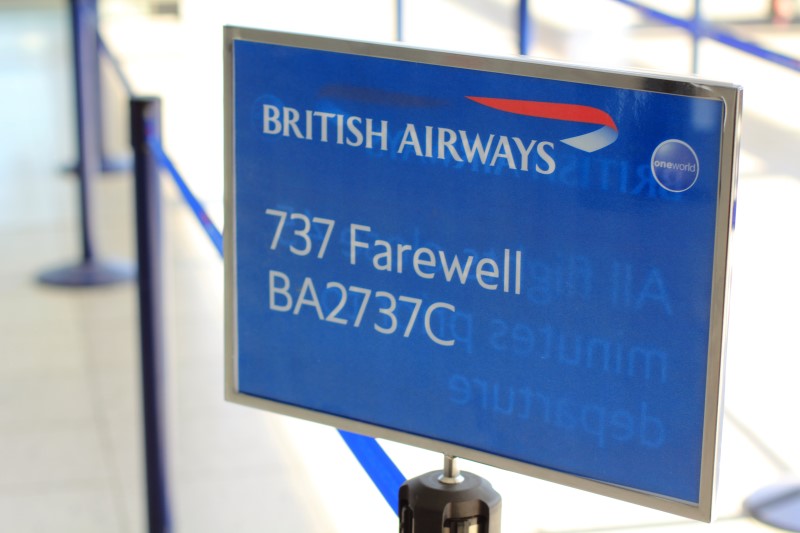 Another clue should have been the multitude of improbably-attired staff: the BA museum having been raided for a variety of uniforms used on the 737s throughout its service. After the usual tapping away at the departure system, I found myself with a rather unusual boarding pass: 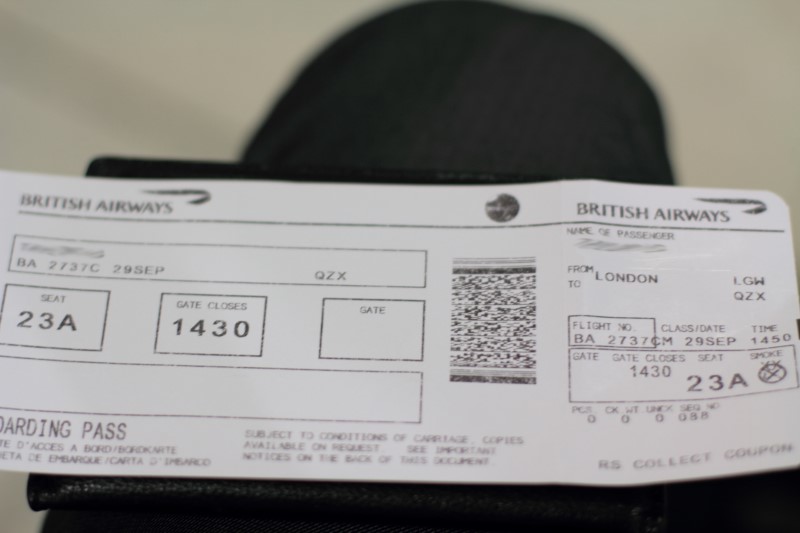 A flight to nowhere! The systems presumably not being happy with an arrival station that matches the departure, today I was officially headed from LGW to QZX – the catchy “Fictitious Pt Gmt Off-line Pt ZZ”. No sign of a booking class, so no tier points or avios for this one! But it did reveal some further luck: with an A seat, I’d have a window to maximise my sightseeing / photographic opportunities!

Next stop was another non-standard check-in feature: goody-bag collection! 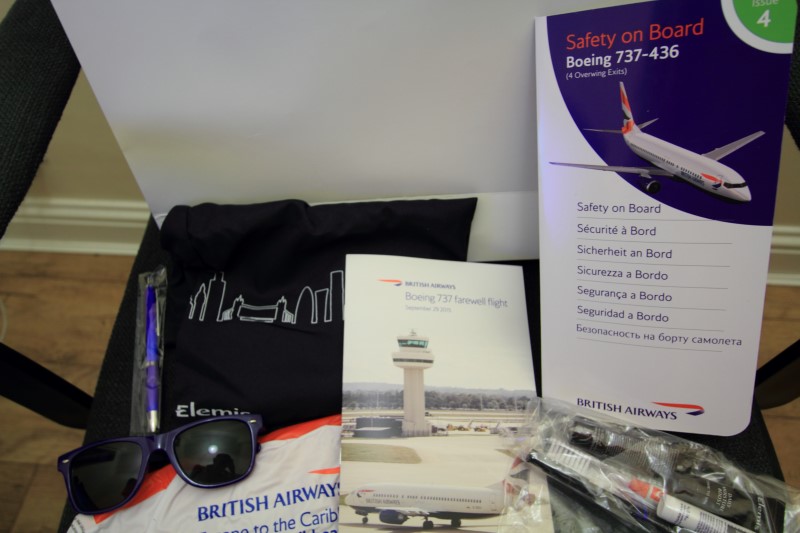 Clearly the promotional items stash had been cleared out, with a BA-branded beachball and pen having found their way in alongside some sunglasses and an amenity kit (liquids conveniently collected together in a security-friendly plastic bag). Digging deeper revealed some more exciting items for plane geeks: a couple of postcards of G-DOCN; a 737-436 safety card (presumably to ensure no-one was tempted to loot the onboard ones, as the plane still needed to be fit for service in case it subbed in for the last day of operations); and a small booklet about the day. This last I have already pilfered from somewhat for the intro to this report; it also detailed our flight, revealing it would be G-DOCW’s final outing before it heads for the desert, gave a quick overview of the 737’s history with BA, and included a look back at the original uniform for crew (the Baccarat Weatherall design) and the various liveries which the planes have worn.

Post-security (which went too easily, as it later transpired I wasn’t issued a sticker on my boarding pass that proved I’d entered from the UK) I had time for a quick lunch and to grab a snap of a departure board that must have had a few on-the-ball passengers double-checking which airport they were at, given that it was showing a flight to Gatwick: 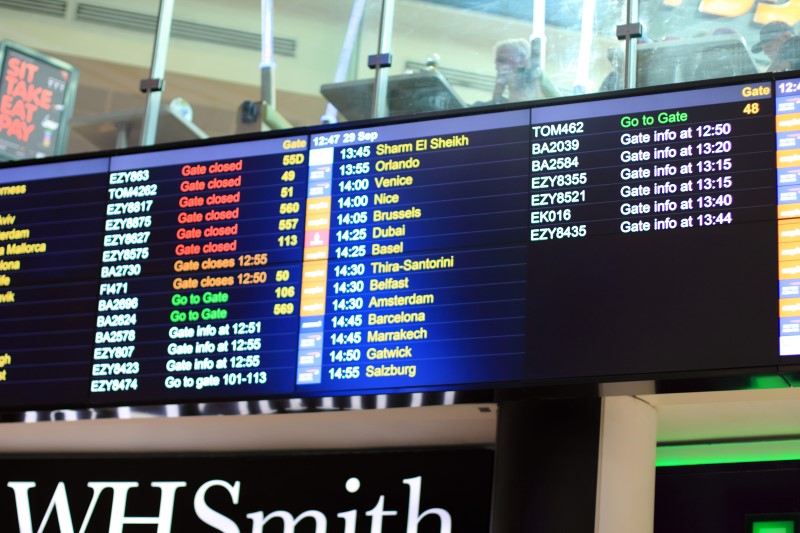 Then it was the inevitable bus gate out to a very, very remote stand – any further and we’d have left the airfield! Despite my security snafu (which had been discovered when I presented myself at the departure gate), I was on the first bus over and so had plenty of time to grab photos on what had conveniently turned out to be a perfect sunny day:

Once a couple more buses had arrived, we were called to board in unconventional fashion: 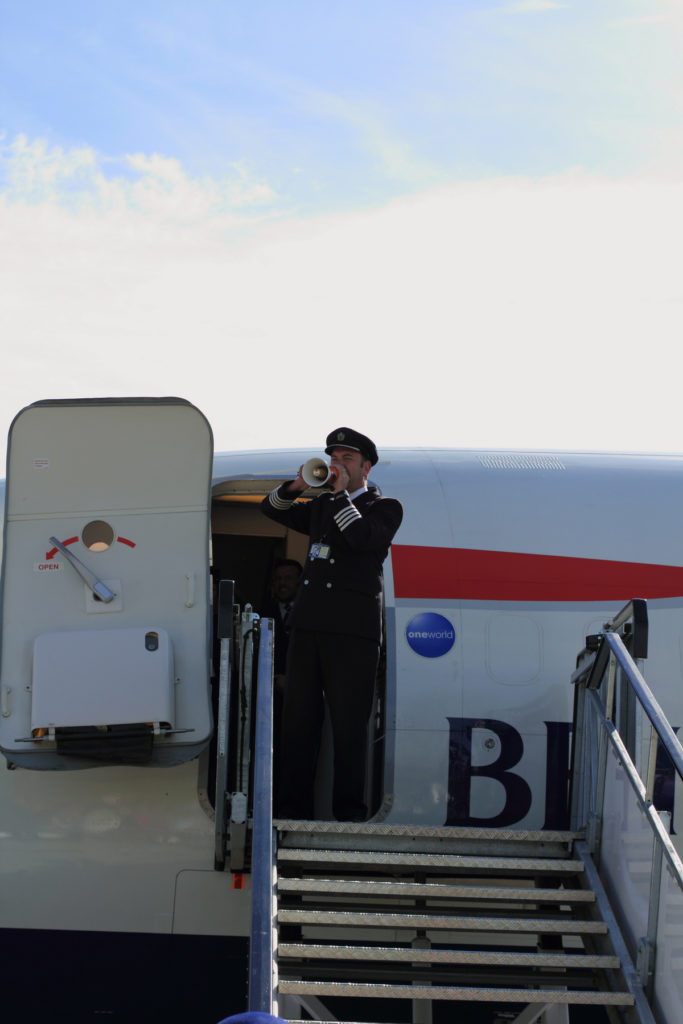 and were able to stash our gifts and other baggage (no yellow tags for this flight!) plus get to know our row-mates. Every seat was taken so I was extra glad to have a window – and to learn from the passenger next to me, who conveniently was one of the route planners – that being seated to the left was the better view given our course. The atmosphere on board was fantastic – I had forgotten in the morning that not everyone who works for an airline is that fussed about planes, so my barely-checked enthusiasm for my afternoon’s entertainment had been met with a variety of confusion and bafflement that this is how someone might choose to spend their time. But now I was amongst kindred spirits, with animated conversations all around.

Once everyone had settled in (but not exactly settled down), it was back outside for a group photo (plus another chance for plane photography and the inevitable selfies, although I decided to leave all my camera kit on board and just appreciate the moment) before returning to our seats for departure proper, waved off by the ground crew. We didn’t manage an on-time departure – I imagine we were the lowest priority of the day! – but I don’t think we were more than 15 minutes late.

Courtesy of flightradar, here’s the route we took:

What I hadn’t appreciated is that permission had been negotiated for flying at about 4-5000 feet: a good 30,000 lower than you’d typically expect. This probably made us the biggest thing by an order of magnitude in that airspace, and rather faster than anything else too: but coupled with the weather meant for fantastic views. Sadly most of my many photos fail to do the sights justice, but here’s a few that worked out:

and some video too:

Impressively (doubly so given the amount of turns built into the route!), the crew managed to provide a full afternoon tea service to all 140-odd passengers in our hour or so of flying. Although I ignored it for a while in favour of the view, and to allow the other passengers the option to lean over for a look or a photo too. 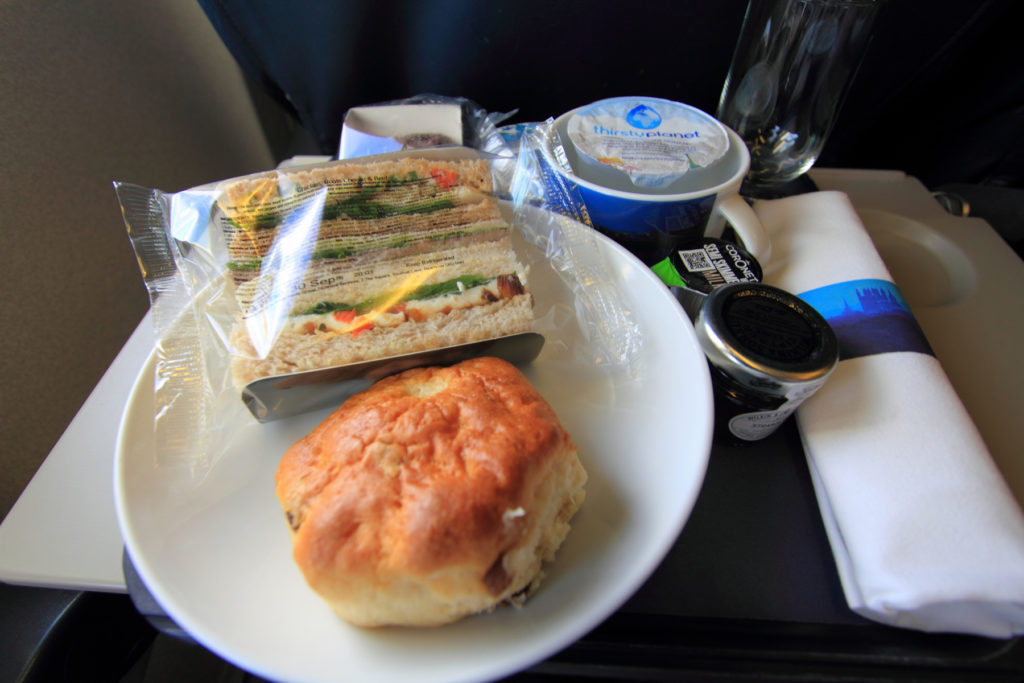 All too soon we reached our turning point at Hastings, which marked the end of the coastline views for me and our upcoming landing. In order to get onto the flight you had to agree to make a contribution to BA’s charity partnership with Comic Relief, Flying Start; it turned out that sporting legend Sally Gunnell was on the flight and would be making the collection! From my position way back on row 23 it was great to see that we’d raised literally a bucketload of banknotes.

That impressive sight was followed by a few more views of the countryside before we returned to Gatwick, where a very… definite landing generated much amusement from all on board. We also managed a few rounds of applause – ordinarily these would annoy me, but here they seemed entirely fitting.

With G-DOCX operating the last commercial services on the 30th, this was G-DOCW’s final passenger flight. The next day, both of them immediately departed on one last jaunt, via Keflavik, Goose Bay and Chicago to their final resting point at Victorville. The end of an era, then; and whilst there are plenty of new aircraft on the way (not least our first 787-9, which arrived at Heathrow the same day), I’m glad I had the chance to mark the departure of these ones.

A variation of this report is on Flyertalk.