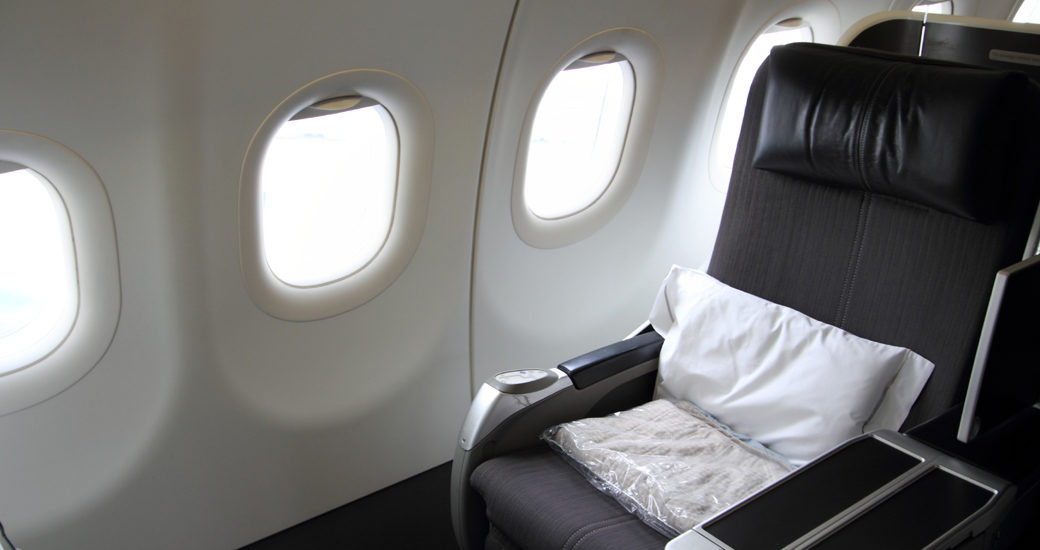 As soon as I learnt about it, the BA1 went straight onto my travel bucket list: this LCY-JFK shuttle is served by a diminutive A318, made even more exclusive by a business-only config which results in just 32 seats. With cash tickets running into the thousands, no avios upgrade route from lower cabins, and a staff travel embargo, I knew the only way I’d be getting aboard would be a straight redemption. So when the new rates were announced earlier this year, to take effect at the end of April, I figured it was now or never to lock in a ticket at the old, bargain price of 40,000 avios (plus, of course, a hefty carrier charge). Prvoided I was happy with a one-way trip, a few dates were possible over the summer. Better still, one in particular lined up well with an onward flight on another (pre-devaluation) business class bargain, Cathay Pacific’s JFK-YVR flight. I was more than happy to build the rest of a trip around that pair, and so I took the plunge and burnt about a third of my avios stash.

Fast forward a few months, and I was excitedly making my way across London by tube and DLR to London City Airport. In my enthusiasm, I arrived about an hour earlier than is perhaps necessary, but no worry, they were ready for me: There’s a check-in line purely for Club World, so I skip the usual self-service kiosk and bag tagging in favour of some human interaction. It’s a bit slower this way, but I’m in no rush and I have to admit to enjoying the spectacle of others being turned away by the queue guard – no shiny cards will get you into this lane, it’s for the New York passengers only, even if today that includes casually attired avios-funded improbables like me.
There’s no dedicated fast track security, but even when it looks busy – and it did – LCY is swift. All told, it was less than 20 minutes for check in and security combined; despite several men in front of me setting off the detector, I was allowed to try it and get clear rather than having to wait for their pat-downs to be completed.
Despite a variety of seating areas, airside at city has felt overcrowded the last few times I’ve been through, and this morning seemed no exception. Fortunately I had a quieter spot to head to: the airport lacks a lounge, but gate 24 at the end of the pier is a ‘gate lounge’. I’d been imagining a typical departure holding pen with the addition of some snacks on a table, so whilst what I found was a pleasant surprise. Whilst nothing like the space of a galleries lounge, the seating was clearly from the same stock, and a decent breakfast buffet was set out along one side. This had some excellent (Doe&Co?) pastries, and not being a caffeine fan I was impressed to find a variety of smoothies to break my usual monotony of water. Staff were proactively making up coffees for those who did want them, and there were alcoholic options too. 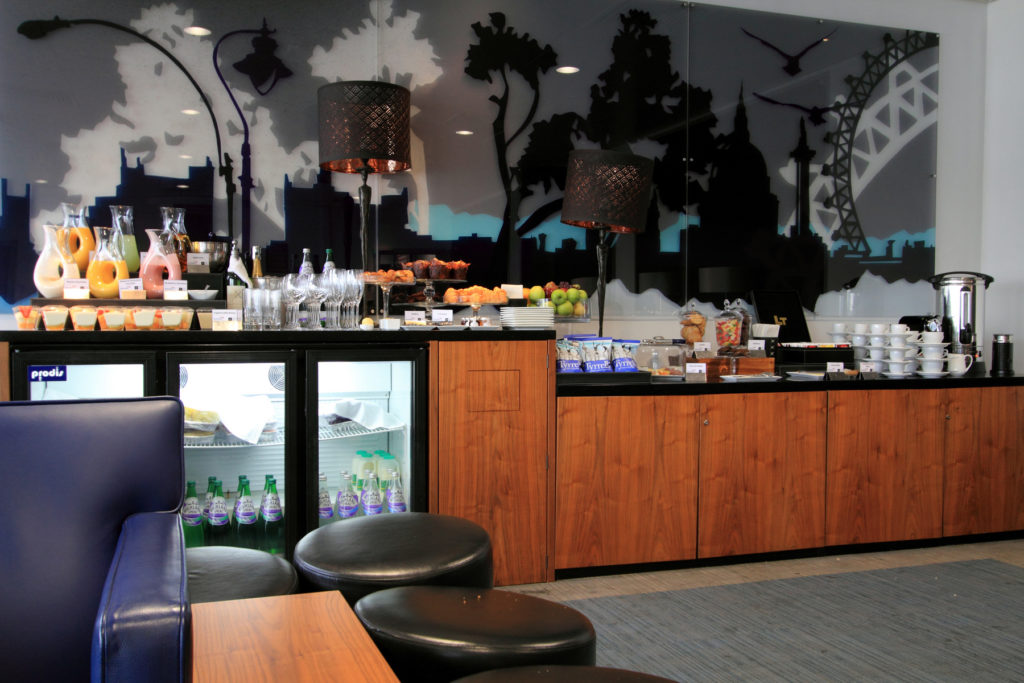 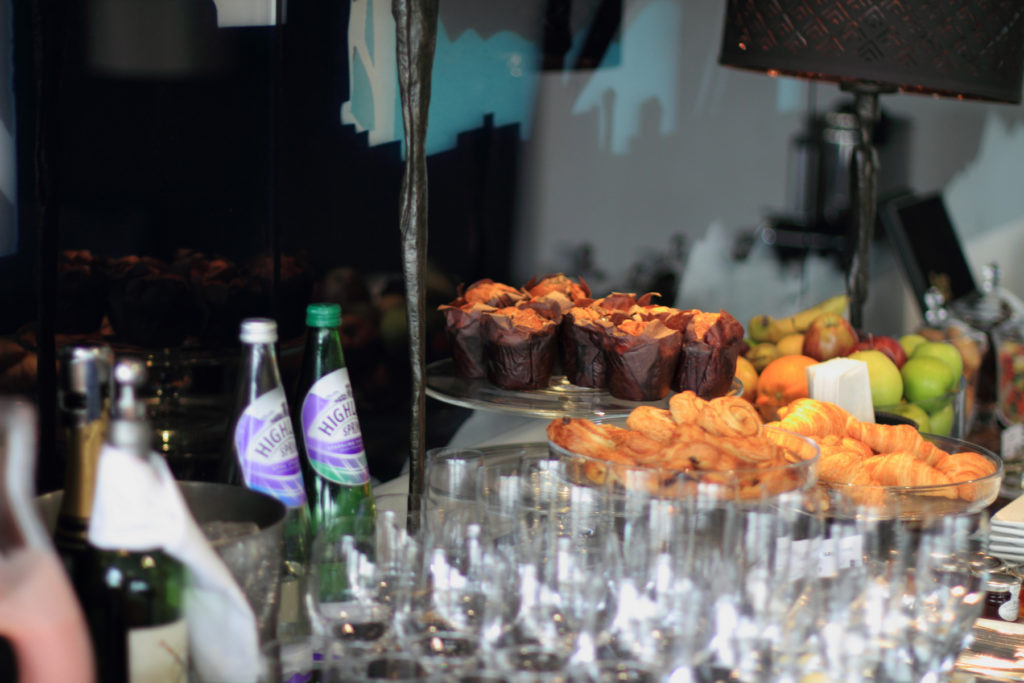 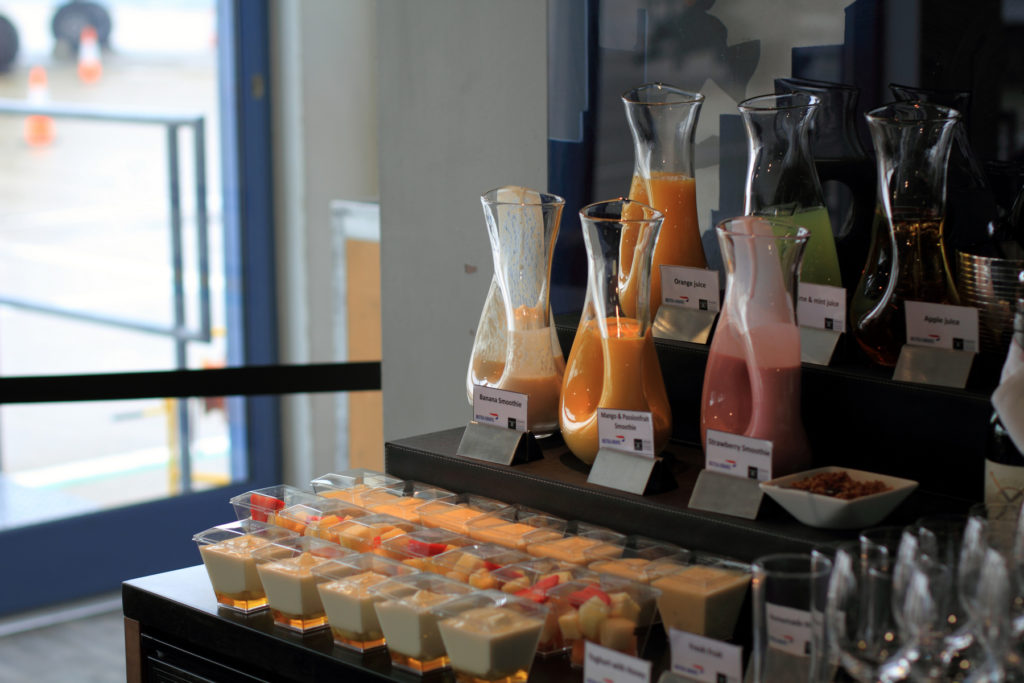 If you want to ignore my wafflings, you can actually explore everything from here to the aircraft interior via google street view!

As that shows, boarding is direct from the lounge door to the tarmac, so I could see our tiny bird, G-EUNA, being prepped along with various runway comings and goings. 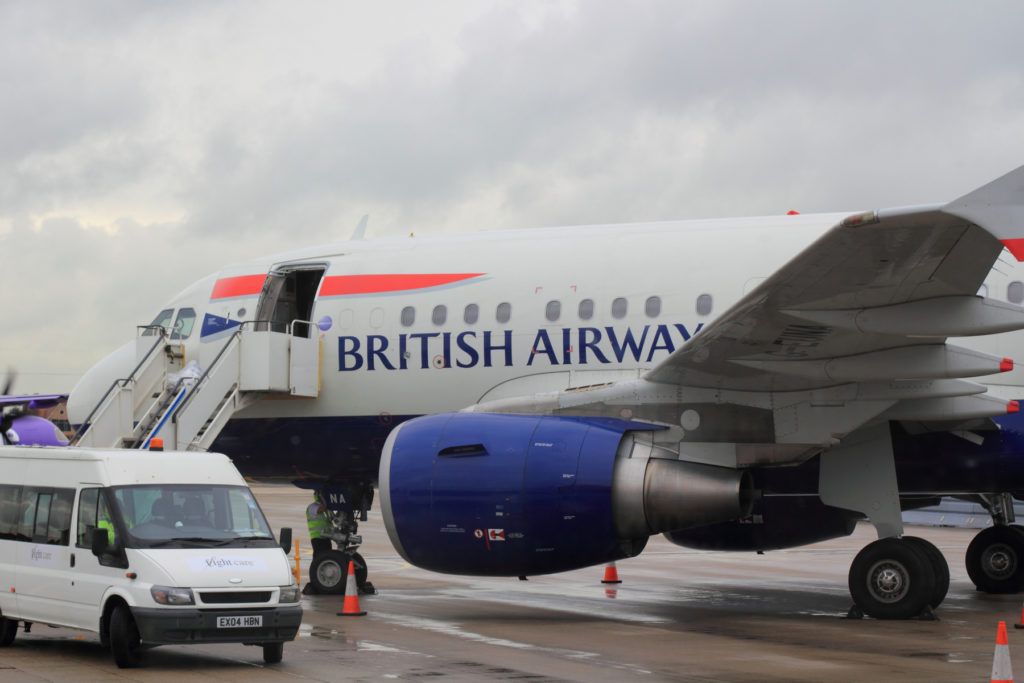 09:25 sees the boarding call and five minutes later I settle into seat 7K. This had been one of two window seat options by the time online check-in opened; 5A was nearer the front but I suspected the view would have been blocked by the wing. A minor stain to 7J had been cleaned but it hadn’t yet dried, so cabin crew moved its intended occupant to row 8, meaning I had the luxury of a private pair. My first impressions of the seat – indeed, the whole cabin environment -were highly favourable.

Although it carries the BA1 flight number, this is a very different service proposition to Concorde. The modern incarnation is arguably even more exclusive – the A318 is barely half the length of its supersonic predecessor, which combined with seats that can become a fully flat bed means room for only a third of the 100 passengers Concorde could accommodate in these: Obviously it’s a lot slower, which is exacerbated by the need for a fuel stop in Shannon when heading west. But that (presumably) means it can depart London with just the fuel needed for Ireland. Whatever the actual load, our on-time (09:45) departure certainly launched off LCY’s short runway with a hell of a spring to its step:

Ground to clouds was barely a minute, and another five saw us punching through the London drizzle into clear blue skies, which I could enjoy the view of through a trio of windows:

The full menu was distributed for our perusal, although our short hop to Shannon meant there was only time for the starter, with a brisk 15 minute turnaround (and a lack of “Exotic fruit brochette”) presumably due to my position near the back. Main course orders were also taken (my first choice happily still being available), and we were welcome to keep a drink to hand, although as usual I was sticking to water.

After some gorgeous Irish scenery we arrived at SNN just before 11. The pre-clearance process was not totally obvious to this novice with hold luggage, but still much swifter than any other US entry procedure I’ve experienced except San Diego (which has the stress of 11 hours flying first!). Whilst this is a novelty from a BA perspective – BA1 is the only service offering it, as BA3 arrives too late – it seems to be standard procedure for US-bound Irish flights. Thus we joined a queue with passengers from various other services – if there’s a fast track for business passengers, I didn’t spot it! However, it’s a swift check – no passenger scan so no need to liberate all your metal, just shoes off and laptops out. The immigration questioning seemed much shorter than usual; they just wanted to know my length of stay, and, given how short it was, my onward plans. Then it was the usual fingers, thumbs and photo, followed by a hold luggage check. This was interesting – I had been wondering where I would collect it, but you don’t – rather, it gets scanned at plane-side, and you confirm which is yours from a photo. Presumably they reserve the right to ask further questions, but they were unperturbed by mine.

Still, unfamiliarity with all this plus my taste for overly-complicated footwear meant I was one of the last back to the plane, albeit within half an hour of leaving it. We had to hang around a bit on the stand as another aircraft decided to loiter behind us, but I’ve no complaints about taking it easy in this seat. I also got chatting to one of the crew, who had wandered back to comment that I looked very familiar. I admitted to being staff, but we couldn’t think of any time our paths would have crossed. Dismayed that I wasn’t making use of the bar, he subsequently saw fit to keep me plied with a steady stream of sweet items both from the club kitchen stocks and the afternoon tea supplies. Or at least, I had assumed that was why…

A bit of déjà vu as we trundle past the Lufthansa Technik hangar for the second time in an hour, before another, slightly less sprightly, takeoff sees us venturing out across the Atlantic by midday.

What seemed to be a standard Club World washbag was issued – I couldn’t think of anything I would need for a day flight, but here’s what you get: 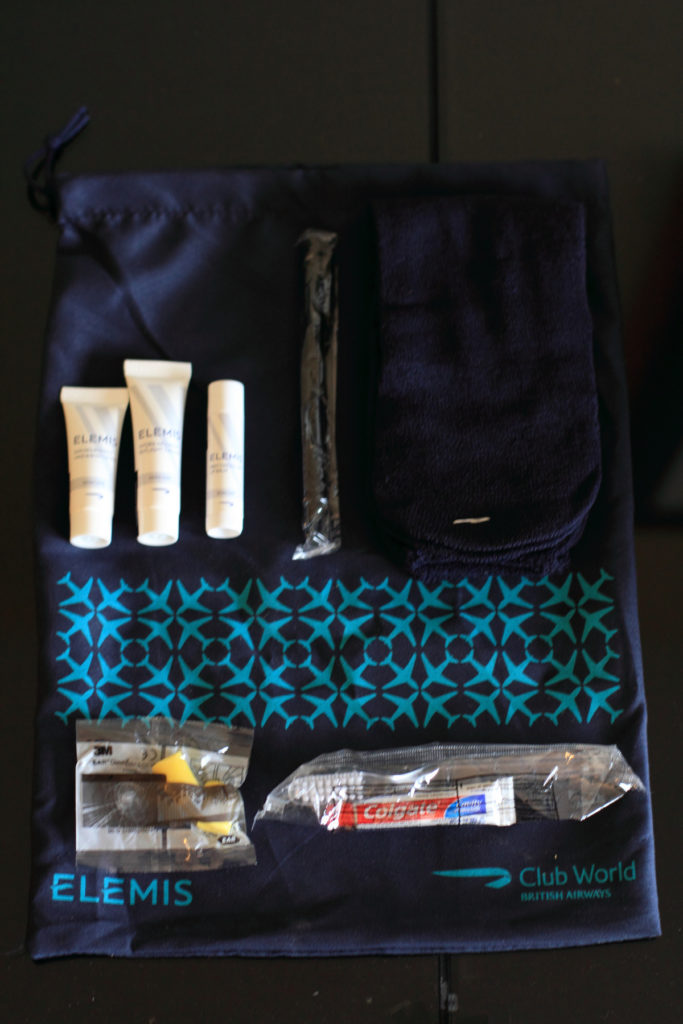 More usefully, iPads were handed out (plus the ever-curious hot towel) – compared to the seatback highlife entertainment system, you have fewer options but a much nicer screen. Fewer, but still plenty – I identified four films I’d wanted to catch at some point, and managed two during the flight. This was also my first taste of active noise-cancelling headphones, and I was thoroughly impressed with their capabilities (less so with what they did to my hair), although even without them the cabin was generally peaceful.

Food – well, salad, which I declined – started to appear at 13:15, and was all done by 2, so another brisk service, although a reasonable pause was built in for dessert. This was probably the best airplane meal I’ve had; after far too many chewy beefs it was great to have a fish that just fell apart to the fork. Veggies were pretty good too, even if the visual presentation was a bit lacking. For the dessert I’d opted for the pear, which was stunning.

However, I did find it convenient to have a vacant seat next to me, into which I could overflow gadgets and trays. Were I to have had a seat mate I didn’t know, juggling dining and entertainment options could have felt a bit cramped. Fortunately I had the space to spread, and was visibly happy – the chatty cabin crew from earlier stopped by once again, declaring “I think I love you!” on account of my obvious enthusiasm for my surroundings. My first film having wrapped up by 3, I’d chosen to kick off my shoes, recline the seat, and just reflect on how fortunate I was to be here. I fly a lot, but this was only my second time in longhaul business class, and it had more than lived up to my hopes.

A second film takes me through to about half five, and just before 6 it’s time for afternoon tea. Again not a huge amount of time for that – the “40 minutes to landing” call went out a smidge ahead of schedule at 6:10, which meant cabin secured in the next 15-25 minutes.

This leaves plenty of time for a flurry of visits from my favourite cabin crew member though: first to offer a handshake and to confirm my name; second to offer a bottle of water for the road; and finally to offer his phone number… Clearly I am poor at reading signals (“I think I love you” should perhaps have been a clue), and thus can’t now fairly judge the service quality, but I hope everyone felt as well treated as I did. Certainly there was a lot more attention to detail from all the crew compared to the rather impersonal experience I had on my return (mainline Club World) flight, such as always using my name when speaking to me.

We land at quarter to 2 (née 7, but let’s swap to the appropriate time zone now), with enough braking to launch my apparently flirtatiously-obtained water into the back of row six. By the hour we’re emerging from gate 1 of JFK’s terminal 7, as if we’d come in on a domestic flight – the perk of that pre-clearance stop in Shannon. That means those without hold luggage can head straight out, and it wasn’t too long before I was reunited with mine and off to the Skytrain platform. From there I was able to get one last look at our little plane – two teenaged girls who’d also spotted it remarked “aww, how cute”, and I had to resist the urge to bore them with facts about how it had just arrived all the way from England.

As I imagine is obvious, I loved every aspect of this flight: the ease of the check-in, boarding and immigration experiences; the comfortable seating, sense of space and peacefulness of the cabin; the in flight entertainment; food that was genuinely good, not just good-for-an-airplane; and the excellent crew. Whilst I’m far from jaded by flying business, this still felt like a cut above and something uniquely special. As would become a theme for this trip, I had meant it to be checking off of a bucket-list item, but it’s just left me with the desire to do it again!