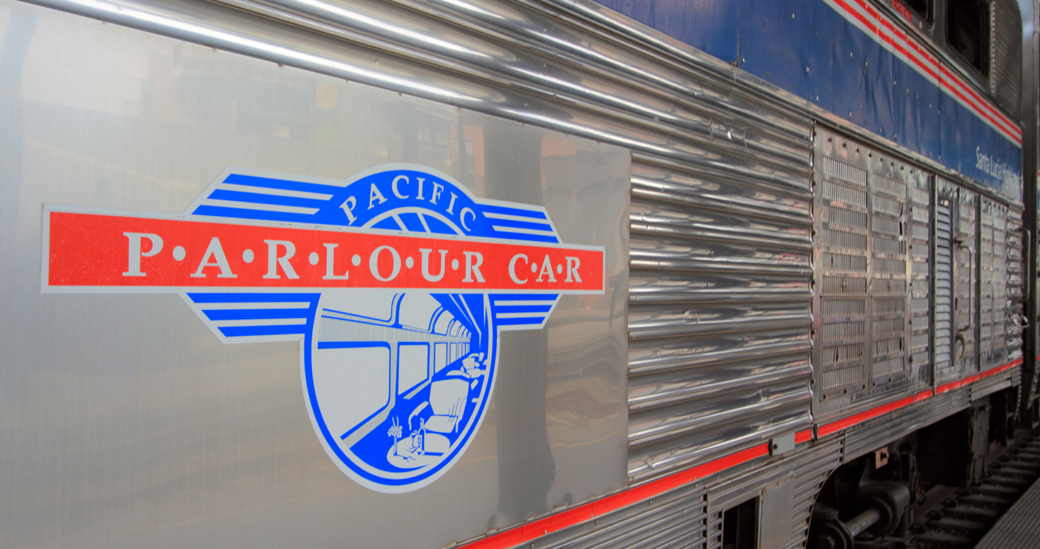 Long distance train travel in the US operates at a scale that even the longest of long-haul flights cannnot compare to. For the 1,377 mile run of the Coast Starlight, linking Seattle to Los Angeles, the double level train features two engines, a baggage car, four coaches of sleepers, three of seats, a pair of lounges (one with a movie theatre, the other a cafe/shop) and a dining car. Not only is there space for far more passengers than a plane at any given time, they could also join or leave at thirty different stops from three different states. Those like me completing the whole trip will be on board for 36 hours, through lunch, dinner, sunset, sunrise, breakfast, lunch and a final dinner.

Given that, I considered it essential to grab sleeper accommodation. The base ticket (as part of my multi-city Vancouver-Los Angeles itinerary) was just $89.65 all the way from Seattle; adding on a ‘superliner roomette’, the most basic of the cabins available, added a hefty $459. Although that can be shared between two occupants, and by travelling sleeper class, you get all your meals and non-alcoholic refreshments for free.

It’s also the only way to gain acccess to the Pacific Parlour, a vintage lounge car exclusive to the Coast Starlight. It serves a variety of functions – alternative meals to the main dining car, coffee and bar service, internet access, passenger activities such as wine tastings, plus that lower deck movie theatre. But the real draw is the large windows, andw with significantly fewer passengers competing for a seat than the Sightseer car back in coach, you’ve a good chance of being able to settle in and enjoy the views slowly rolling by.

Sleeper cars are located to the front of the train; mine was directly ahead of the parlour car. Movement between coaches is via the upper deck, which my roomette was located on – quicker for access, but potentially noisier from foot traffic. There are some roomettes on the lower deck too, although that space is also used for some of the larger (family and accessible) rooms, and I never figured out how to request a particular location at time of booking anyway! Toilets and a shower are shared with other roomette and family bedroom passengers, although the ratio is good and I never had to wait. There’s also luggage storage on the lower level, and a spot for coffee and fresh fruit.

As for the roomette itself, well, it was plenty of space for a solo traveller – might be a bit of a squeeze for two, especially when it comes to sleeping, but then it works out much cheaper per passenger. You also get a decent portion of window, too.

Apart from meals in the dining car, occasional strolls along the rest of the train, or fresh air breaks at stations, these two spaces would comprise my home for a day and a half, as I travelled down the west coast of the US. It’s not fast compared to European trains (let alone a flight), but given both the comfort inside, and the views outside, this journey is truly in the spirit of the great affair – to move, not to get somewhere.